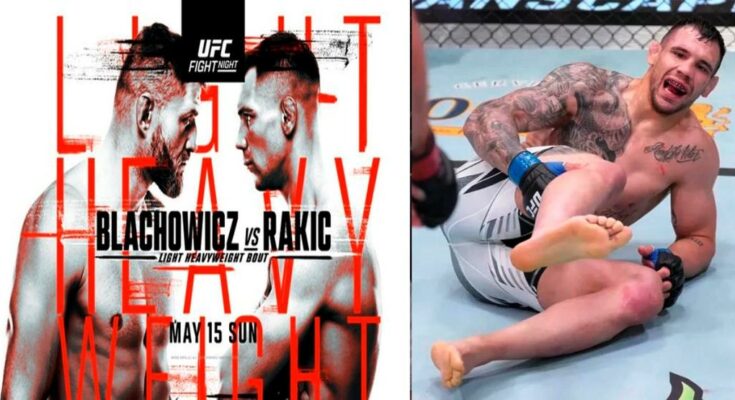 UFC Vegas 54 main event was a fun and entertaining contest for as long as it lasted. The light heavyweight standouts battled it out in a very competitive opening two rounds.

Unfortunately, disaster struck in round three when Aleksandar Rakic appeared to blow out his right knee while stepping back and planting his foot. He collapsed to the ground and Jan Blachowicz took mercy by not unleashing any ground and pound before the referee ultimately stepped in.

A well-known physiatrist has chimed in with his thoughts regarding Aleksandar Rakic’s freaky knee injury in the main event of UFC Vegas 54.

Brian Sutterer, a Mayo Clinic doctor who is known for breaking down sports-related injuries on YouTube, explained what might have caused Rakic’s misfortune. Based on his initial analysis, Sutterer is convinced that the top-ranked light heavyweight contender has sustained an anterior cruciate ligament (ACL) injury.

Discussing the incident in a four-minute video on his YouTube channel, Sutterer said:

“This anterior tibial translation and that shift that we see backwards, is an ACL injury until proven otherwise. This is actually the similar position to what we see with sports like basketball or football when somebody is running and then they jump or they cut.”

The Minnesota-based physician also broke down footage from the fight. Looking at the replay, it was apparent that something had popped inside the Austrian fighter’s calf before he went down grimmacing in pain. According to Sutterer:

“Of course, Rakic’s lead leg – his left leg – was getting beaten up all night by Blachowicz, but this was actually the right leg. If you look closely, here, you can actually see the pop. What we’re seeing there is essentially the tibia, or the shinbone, that’s displaced forward or anterior, and all of a sudden right there, pops back into its proper position.”

“A great battle took place in the octogan tonight but unfortunately it ended not the way Jan and I or the fans wanted. The same damn injury from 3 weeks ago in camp showed up again tonight. I felt I won both rounds, round one being close but round two was just mine then I opened up really good even in the third before my knee buckled. Knowing the fact that my cardio was off the chart ( with a heart beat at 36 in sleep ) I would start to picking him apart from third round on but it is what it is. Congratulation to Jan and I wish him the best. I will take care of this injury and come back like you never seen me before. This is a unfinished fight between Jan and I and I really hope @ufc gives me a REMATCH .”