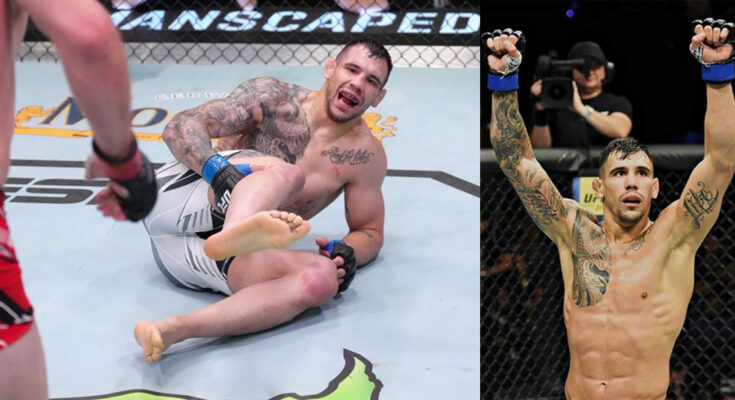 Unfortunately, disaster struck in round three when Aleksandar Rakic appeared to blow out his right knee while stepping back and planting his foot. He collapsed to the ground and Jan Blachowicz took mercy by not unleashing any ground and pound before the referee ultimately stepped in.

Aleksandar Rakic received the news he was dreading on Monday when it was confirmed he suffered a torn ACL in his UFC Vegas 54 main event with Jan Blachowicz.

Rakic’s knee buckled in the third round of this past Saturday’s headliner when he took an awkward back step and gave out underneath him. Rakic (14-3 MMA, 6-2 UFC) was immediately ruled unable to continue, and Blachowicz (29-9 MMA, 12-6 UFC) was awarded the win in the critical light heavyweight bout.

The painful reaction on Rakic’s face made it clear there was likely significant damage, and knowledgeable people verified with a person close to the situation, who requested anonymity, that Rakic was confirmed to have torn the ACL in his right knee following an MRI.

Ariel Helwani was first to report news of Rakic’s diagnosis on Monday, adding that Rakic has torn the ACL in his left on two previous instances, with this being the first in his right knee.

As a result of the injury, Rakic will be required to undergo surgery. A date for the procedure has not been scheduled.

Rakic, who entered UFC Vegas 54 as the No. 9-ranked fighter in the USA TODAY Sports light heavyweight rankings, does not have a timeline to return, which will be covered under the UFC’s insurance policy because he suffered the injury mid-fight. Historically, ACL tear have kept athletes sidelines from nine month to more than 12 months.

Prior to the injury, Rakic and former UFC champ Blachowicz were tied 19-19 on the scorecard, having split the first two rounds.