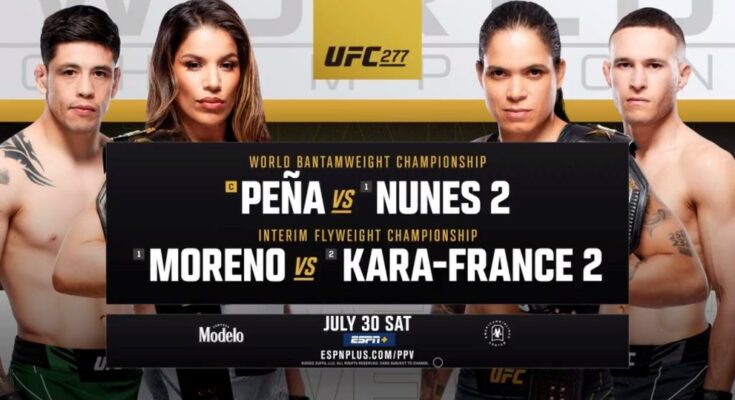 Currently, Amanda Nunes is attempting to bounce back from the first loss of her UFC run since 2014. She was submitted by Julianna Pena at UFC 269 in December, dropping the women’s bantamweight title.

Amanda Nunes’ loss to Julianna Pena is widely regarded as the biggest upset in MMA history, topping the likes of GSP vs. Matt Serra and Tim Sylvia vs. Randy Couture.

Many opinions were cast into the MMA sphere about why exactly Nunes had lost following her bout with Pena.

Dana White, the UFC president, even gave his opinion, saying that he felt Nunes had become too comfortable and that her hunger was gone.

The fight snapped Nunes’ 12-fight win streak since losing to Can Zingano in 2014. Now, Nunes gets the chance to avenge that loss and regain the 135-pound crown when she meets Pena at UFC 277 on July 30 in the main event.

With the rematch between Nunes and Pena taking place this weekend, Nunes was asked in an interview if she agreed with Dana White’s assessment.

She admitted that she did in fact agree with White, stating:

“Yeah, I got very comfortable, and you want to enjoy your life when you do all the things that I did. I want to travel, I want to go see my family, I want to rest a little bit. And then the tendency is like, you slow down a little bit.”

Nunes appears to be facing reality head on and doesn’t seem to be running from the truth.

‘The Lionness’ is showing an acute level of self-awareness and humility by admitting that her success could well have played a part in her loss. It will be interesting to see if the broadening of perspective that Nunes gained through her defeat will make her more dangerous in her return.

The UFC returns to pay-per-view Saturday with UFC 277 at American Airlines Center in Dallas, with two title fights atop the card.