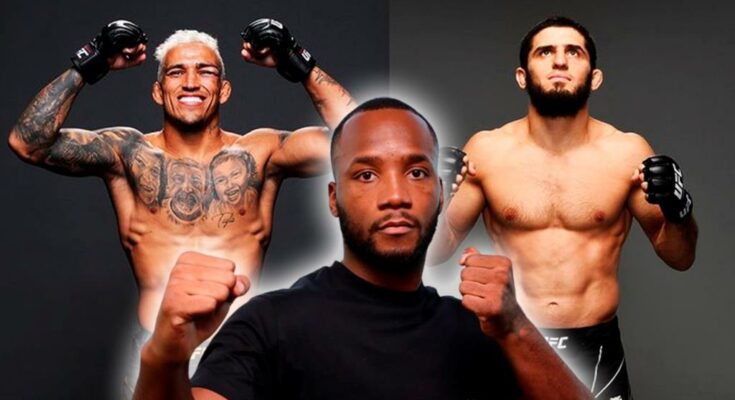 The British fighter refused to give his predictions for the fight and instead joked that he would ban it.

Charles Oliveira and Islam Makhachev will enter the octagon in a highly anticipated matchup on October 22nd in Abu Dhabi for the vacant Lightweight strap. Ahead of the fight, Makhachev has opened up as a the favorite.

Leon Edwards has hilariously suggested that he wants to ban the upcoming Lightweight title fight between Islam Makhachev and Charles Oliveira.

However, according to Leon Edwards, the fight is too close to call and could go either way. Edwards was recently in attendance at the UFC London Fight Night ahead of his fight against Kamaru Usman for the UFC Welterweight championship.

During a recent interaction with the media at UFC London, Edwards was asked to opine on Oliveira vs Makhachev. While suggesting that he’d like to ban the fight, he said:

“That’s an odd one. This is, it’s a difficult fight now. Of course, Islam is a great, great wrestler though and he’s strong in what he does but I feel like Charles is just on his momentum now, his confidence is so high, I don’t know. I want to ban that fight.”

While the odds tell one story, Leon Edwards has a completely different opinion and rightfully so. The Islam Makhachev vs Charles Oliveira is a fight which is really hard to predict.

This is one of the most highly-anticipated matchups of the year as it’ll feature a submission wizard taking on a grappling master.

When this one hits the ground, many expect that’s when the fun will truly begin.

The Dagestani is excellent on the ground and on the flipside Charles Oliveira comes to the fight with the most impressive submission resume in the history of UFC. Moreover, Oliveira certainly has an edge over Makhachev when it comes to striking. It will be interesting to see how the fight plays out when the two finally enter the octagon.

It is safe to say that actual outcome of the fight can only be seen come fight. Till then, the fans and the MMA pundits can continue to predict how the fight will turn out.