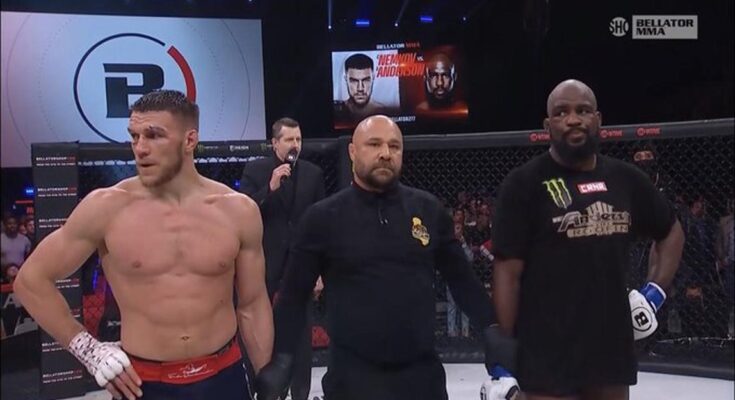 Nemkov (15-2 MMA, 7-0 BMMA), the reigning 205lbs champion, will be looking to earn his third straight title defense this evening. The Russian last competed at Bellator 268, where he defeated Julius Anglickas via submission to advance to the World Grand Prix finals.

Meanwhile, Corey Anderson (16-5 MMA, 3-0 BMMA) has gone a perfect 3-0 since joining the Bellator ranks in the November of 2020. ‘Beastin 25/8‘ earned his spot in the World Grand Prix final by defeating former title holder Ryan Bader via first round TKO.

Bellator 277 co-main event begins and Vadim Nemkov goes upstairs with a high kick to start. Corey Anderson blocks that but then eats a leg kick. Another heavy low kick lands for the Russian. That strike took Anderson off his feet briefly. Corey is back up but eats a good right hand from Nemkov.

The champ is working his jab well. Anderson looks to counter with a hook but misses. A nice kick to the body now from Vadim Nemkov. Both men are swinging a lot of strikes early on here. The fighters clinch up and Nemkov pushes Anderson against the cage. He lands a right cross as they break. Anderson misses with a jab and Nemkov connects with a left hook. ‘Beastin 25/8’ shoots in for a takedown but he is stuffed. Nemkov circles off the fence and lands a crisp jab. He follows that up with some good low kicks.

Corey Anderson is doing his best to get inside but keeps eating jabs and low kicks while attempting to do so. The former UFC fighter gets off a decent right hand. Vadim shoots for a takedown but it is not there. Anderson lands a nice uppercut. Nemkov counters with a right hand. The horn sounds to end round one.

Round two of the Bellator 277 co-main event begins and Corey Anderson is quickly in on a takedown attempt. He has Nemkov pushed up against the cage but the champ is doing a good job of defending thus far. Anderson continues to press for a single leg and he gets it.

He winds up in the full guard of Vadim Nemkov. The champ attempts to scramble but Anderson keeps him pinned down and advances to half guard. Corey postures up and lands a flurry. Nemkov scrambles back to full guard. ‘Beastin 25/8’ continues to land some short shots. Vadim scrambles and this time gets back to his feet. He pushes Corey Anderson up against the cage and lands a few shots of his own to close out the round.

Round three of the Bellator 277 co-headliner begins and Nemkov lands a good straight right. He follows that up with a left hook that just misses. Anderson leaps in with a combination and looks to shoot for a takedown but it is not there. He winds up on another combination and this time Nemkov gets clipped.

Corey immediately shoots in and lands a big takedown with three minutes remaining in the round. Vadim Nemkov looks to lock up a guillotine. It appears to be tight as Anderson desperately scrambles to break free. He does, and swiftly moves to the back of Nemkov. The champ scrambles in an attempt to get Corey Anderson off of him but winds up flat on his back.

He throws up an armbar submission but ‘Beastin 25/8’ quickly breaks free. Good ground and pound now from Anderson. The referee steps in due to a cut. The wound was caused by a clash of heads. This will be interesting as the fight has been stopped. It should be a no-contest  (accidental headbutt).