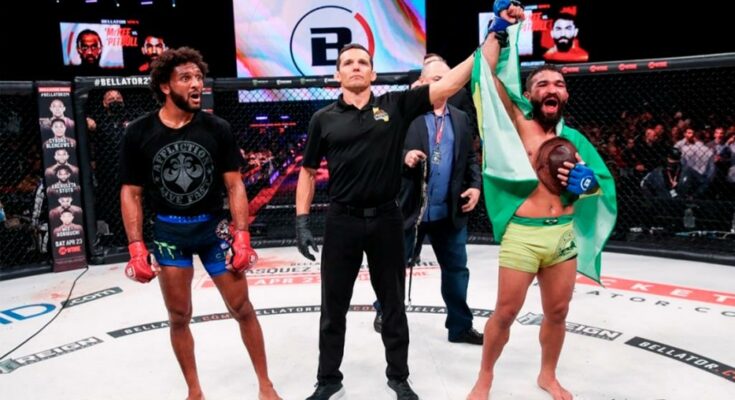 Bellator 277 event is headlined by a featherweight title fight rematch between A.J. McKee and Patricio Freire.

McKee (18-0 MMA, 18-0 BMMA) will be looking to earn his first career title defense when he squares off with ‘Pitbull’ for a second time this evening. ‘The Mercenary’ has won 5 of his past 7 bouts in the very first round, including his recent defeat of Freire.

Round one of tonight’s featherweight title fight begins and A.J. McKee runs forward and lands a spinning kick to the body. He follows that up with another hard kick. Patricio Freire counters with a solid right hand. ‘The Mercenary’ returns fire with a right hand and then a high kick. ‘Pitbull’ blocks the kick and then responds with a low kick.

Both men are firing off shin attacks early. McKee with a nice left kick to the body. Freire responds with a left hook. Another kick scores for A.J. ‘Pitbull’ responds with a calf kick. The fighters trade low kicks and then McKee lands a right hand. Patricio Freire returns fire with a pair of front leg low kicks. He explodes with a right hand. A.J. McKee answers with a front kick. The horn sounds to end round one.

Round two of the Bellator 277 main event begins and both men lands heavy kicks early on. McKee with a nice straight left. The fighters clinch and A.J. lands a good knee. Patricio Freire breaks free but misses with a counter left. He lands a nice low kick and then another.

A.J. McKee returns fire with one of his own. Both men with low kicks in the pocket now. ‘Pitbull’ storms in with a flurry of punches. McKee avoids and circles out. The champ with a nice straight left and then another. He attempts a flying knee but ‘Pitbull’ counters with a left hook.

A good kick to the body now from McKee. Patricio answers with a low kick. It appears the fighters clashed heads there but both men seem ok. Patricio Freire with some good body shots to close out round two.

Round three of the Bellator 277 main event begins and Patricio Freire appears to be brimming with confidence. He comes forward and lands a solid low kick. A.J. McKee returns fire with one of his own. The crowd is growing restless but this is a technical battle. Another low kick lands from the former champion. McKee returns fire with a jab. ‘Pitbull’ counters with a big right.

That appeared to stun the champ but he’s able to shoot in and score a takedown. McKee begins working some ground and pound with Freire backed up along the fence. ‘The Mercenary’ with some good body shots and then a hard elbow.

Freire scrambles up to his feet and then drops down on a guillotine choke. This is a tight submission attempt. A.J. McKee is battling hard to escape. He does! Big punches now from the champion. Freire rolls for an armbar. It is not there and now it McKee looking to take Patricio’s back. The horn sounds to end round three.

Round four of the Bellator 277 headliner begins and A.J. McKee attacks with a front kick to the body. Patricio Freire returns fire with a nasty body kick. The champion comes over the top with a left hand. He follows that up with a crisp jab up the middle. ‘Pitbull’ responds with a flurry that misses. He throws another combination and lands a nice hook to the body.

A.J. McKee with a nice left hand. He follows that up with a slapping right. Freire counter with a left hook but A.J. answers with a straight left. He lands another. ‘Pitbull’ leaps in with a right and then a body shot. McKee circles out and misses with a hook. One minute remains in the round. McKee dives for a takedown but Freire is able to sprawl. The horn sounds to end round four.

Round five of the Bellator 277 main event begins and A.J. McKee is quickly in on a takedown. He looks to take the back of Patricio Freire but after some jostling the former champ escapes and scrambles back to this feet. Three minutes remain as McKee lands a jab. ‘Pitbull’ counters with a right hand. McKee with a nice combination. He lands another.

Freire fires back with a right hand. A.J. misses with a high kick. He lands a follow up kick to the body but then eats a counter right from Freire. The former champ is starting to throw more punches now as the last minute comes to fruition. A.J. McKee answers with a four-punch combo. He shoots in and scores a late takedown. Freire is back to his feet but McKee is the one landing punches and knees. The horn sounds to end the fight.