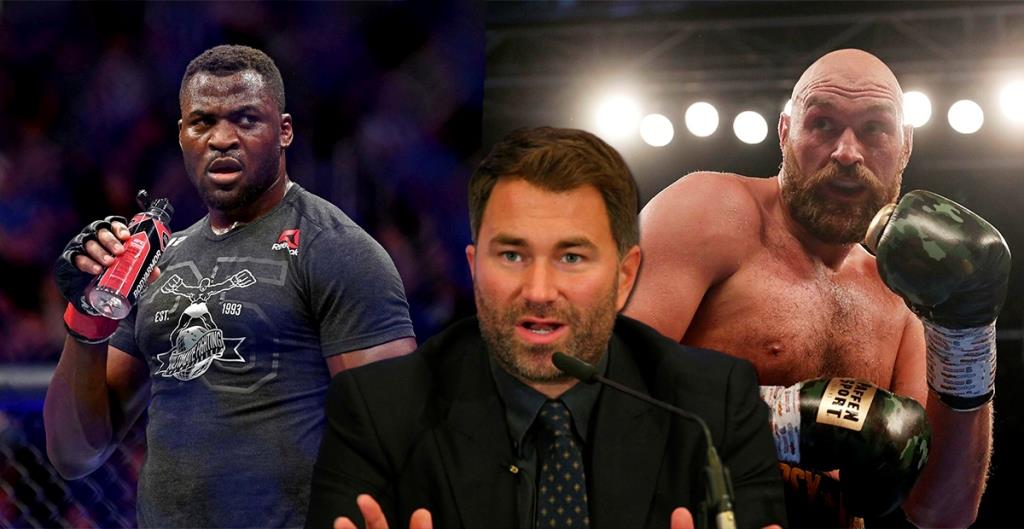 Eddie Hearn has issued his verdict to a potential showdown between Tyson Fury and UFC star Francis Ngannou, expressing doubt that a fight would occur.

Ngannou has been vocal with his desire to face-off against Fury or Deontay Wilder in the boxing ring and wants a clause allowing him to do so in any fresh contract with UFC.

Fury himself added fuel to the fire last week with a teasing tweet to supporters, which comes at a time when negotiations with Dillian Whyte rumble on.

The WBC has mandated Fury to defend his belt against Whyte, in a bout likely to go ahead in March, but terms are yet to be agreed.

Fury is adamant he will be fighting in the first quarter of the year, keeping him active ahead of a potential unification bout against Oleksandr Usyk or Anthony Joshua, which means the clock is ticking down on an agreement with Whyte.

However, Hearn is not concerned that his fighter could miss out on a bout and, while he admits the discussion is exciting, feels it’s a fight fans won’t be seeing anytime soon.

“I think it’s nonsense but it’s all good. Anything that gets people talking is good,” he said, launching his and DAZN’s 2022 offerings.

“It is quite exciting to think of the prospect of Tyson Fury fighting Francis Ngannou in a ring or in a cage, wherever. But I don’t see it happening any time soon.

“Anything like that drives fan engagement, which is good, it’s good for Tyson and Francis Ngannou, boxing and the UFC. Anything that gets people talking is good news.”

Whyte is in an ongoing arbitration with the WBC regarding the length of time it has taken for him to get his title shot and an outcome is still a way off.