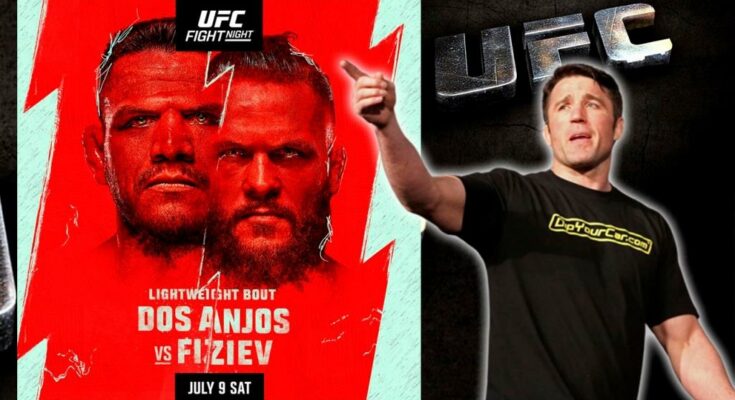 Rafael Dos Anjos and Rafael Fiziev will face off in the main event of UFC on ESPN 39 on July 9.

On an episode of Beyond The Fight, Chael Sonnen made his prediction for the upcoming lightweight battle between Rafael dos Anjos and Rafael Fiziev. dos Anjos and Fiziev are headling UFC’s latest Fight Night at the Apex in Las Vegas, and Sonnen predicted that RDA would get his hand raised. ‘The Bad Guy’ said:

“My official prediction, Fiziev vs. RDA. Guys I’m going RDA… These guys are gonna have to go fight. They are going to have to stand out there and trade and bang. And heart and conditioning and toughness is going to come into it, I’m favoring RDA.”

Chael Sonnen went on to discuss the path to victory for both opponents and why he leans in favor of RDA. ‘Uncle’ Chael believes that dos Anjos’s experience in championship rounds and ability to weaponize pace will be the difference, saying:

“If so (RDA wins), how’s he going to do it? Well those later rounds are relevant… RDA is one of those guys that has weaponized pace… RDA is actually one of the top guys in all our sport for pushing pace and making that a weapon… After 15 minutes, there’s 10 left, and those are what’s called championship rounds and that’s what RDA is made for. That’s when he’s ready, and that’s what he’s prepared for.”

This will be Fiziev’s first main event bout and therefore his first five-round fight within the UFC. ‘The Bad Guy’ believes that since RDA has a lot more experience in five round fights, he will be more likely to prevail. However, Fiziev has yet to lose since his UFC debut and has won five straight contests, so it will be exciting to see if Uncle Chael is correct Saturday night.

You can watch the full episode of Beyond The Fight below:

Chael Sonnen believes that the winner of dos Anjos vs. Fiziev should call for a No.1-contender’s bout with a win on Saturday. The retired UFC title contender said:

“A number one contenders match I believe is extremely realistic for either guy, RDA or Fiziev.”

‘The Bad Guy’ said this after cautioning dos Anjos against calling out Oliviera should RDA win on Saturday night. Chael had a good reason for his warning, stating:

“If he calls out Charles Oliviera, which, not for nothing, that’s a very interesting match, but if he does that, I think it’s going to fall on deaf ears. Just simply because I believe that Charles is tied up with Islam (Makhachev).”

Regardless, it will be interesting to see how the lightweight title picture shakes out after Saturday night.