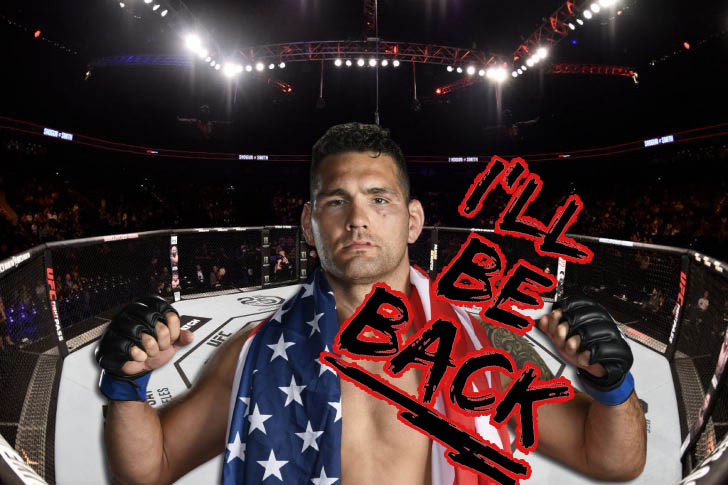 Former UFC middleweight champion Chris Weidman says he is confident he will fight again after breaking his leg against Uriah Hall at UFC 261.

Chris Weidman snapped his leg on a kick that Hall checked in the opening moments of their fight at UFC 261. It was one of the most brutal injuries we have ever seen inside the Octagon, and at the moment it happened, many fans were wondering if Weidman would ever fight again. Incredibly, Weidman is already walking around less than two months after the incident took place. In fact, he’s already back in the gym doing some pad work and light sparring, and he even golfed a full 18 holes. “The All-American” might have broken his leg, but he’s not letting that injury stop him from continuing to be a tremendous athlete.

Speaking to MMAFighting.com, Weidman spoke about the road to recovery from his gruesome injury. Though Weidman knows that he still has plenty of hard work and rehab ahead of him, he’s confident that he can continue to get healthier and one day fight again.

“There’s still a lot of milestones I’ve got to get through and I’m sure there’s going to be some setbacks, but I’m prepared for it. Nothing’s going to break me. I’ll just keep moving forward. If at the end of the day, I’m in the gym and as I’m as good as the doctors say I’m going to get and I can’t do anything that I used to be able to do, I’m not going to fight. (But) if I think I can be the best in the world, and I can do what I need to do with this leg, then I’m going to fight,” Chris Weidman said.