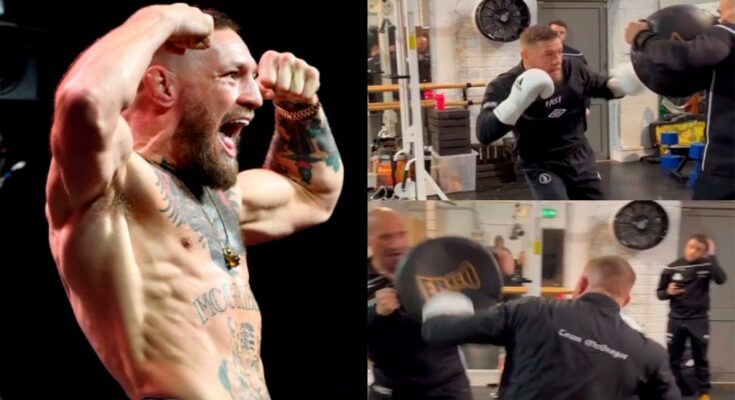 Conor McGregor is currently training in preparation for his return to active competition. The Irishman has been visiting the Crumlin Boxing Club in Dublin lately.

His current training routine focuses mainly on hitting the mitts and working on bulking up his physique.

Most recently, ‘The Notorioous’ posted a photo on Instagram comparing his physique over the years. It also shows his current bulked-up frame.

Conor McGregor attached the following caption to the post:

At the bottom of the picture, we can see Conor McGregor from 2015, when he became the interim and later the undisputed UFC featherweight champion. The upper weight limit of the featherweight division is 145lbs.

In the middle is his physique from 2017. On August 26 of that year, ‘The Notorious’ fought Floyd Mayweather in a boxing match at the super welterweight class with a 154lbs limit.

Finally, at the top of the image, we can see the current frame of Conor McGregor. It’s easy to see that he’s been bulking up and putting on quite a bit of muscle.

For almost a year, McGregor has been in the process of rehabilitating his broken leg, an injury he suffered during the Dustin Poirier fight at UFC 264.

The Irishman recently expressed interest in making a jump to welterweight to challenge Kamaru Usman for UFC gold. ‘The Notorious’ claims to be bulked-up enough to endure the fight at the 170lbs weight limit, which he tried to prove with the recent picture.