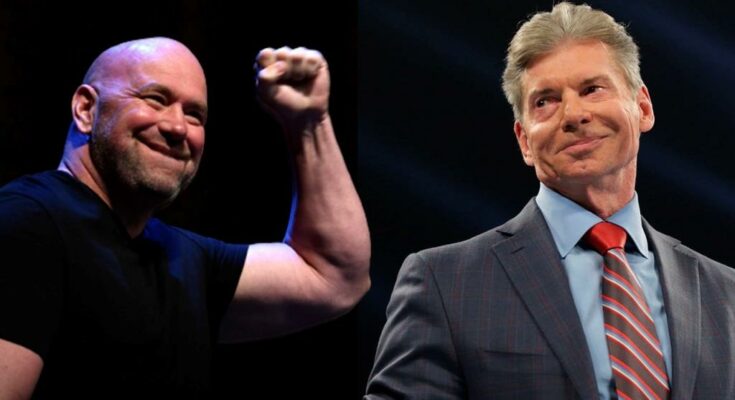 The story began with the fact that UFC president Dana White has attended a WWE event. He was present for Ronda Rousey’s appearance at WrestleMania 34. Rousey is, of course, a former UFC champion, meaning that White’s support for the wrestler wasn’t surprising.

Dana White stated on Twitter that the event was his first live WWE show as an adult. However, he mentioned that he attended previous live wrestling events as a child, though he didn’t state which ones.

White’s presence no doubt gave a boost to the WWE event and the wrestling promotion’s former CEO Vince McMahon recently returned the favor. He attended UFC 276: Adesanya vs. Cannonier.

McMahon wasn’t the only WWE legend to attend UFC 276, with Stephanie McMahon, Triple H and Pat McAfee all there for the event.

This was reportedly the first UFC pay-per-view that Vince McMahon had attended, with the two organizations rarely crossing paths in the business world. The two companies have had fighters swap sides over the years, with Ronda Rousey joining WWE and CM Punk famously attempting his hand at MMA.

Brock Lesnar was the most successful crossover, with the wrestler becoming a champion in both the UFC and WWE during his time competing in the two organizations.

Who has a higher net worth, Dana White or Vince McMahon?

Both Dana White and Vince McMahon are incredibly wealthy due to their careers. However, McMahon gets the nod on this one, with the WWE legend having a net worth of $2.4 billion dollars in 2022.

The UFC president is by no means short of money, with a reported net worth of around $500 million dollars. However, there’s no doubt that McMahon’s age plays a role in the difference, with the 76-year-old having a much longer career than the 52-year-old White.

McMahon is the former CEO of WWE and has been a part of the company since the 1970s.

To put that into perspective, White only got involved with the UFC in 2001. This means his net worth is rather impressive given the small amount of time the UFC has been a mainstream organization.