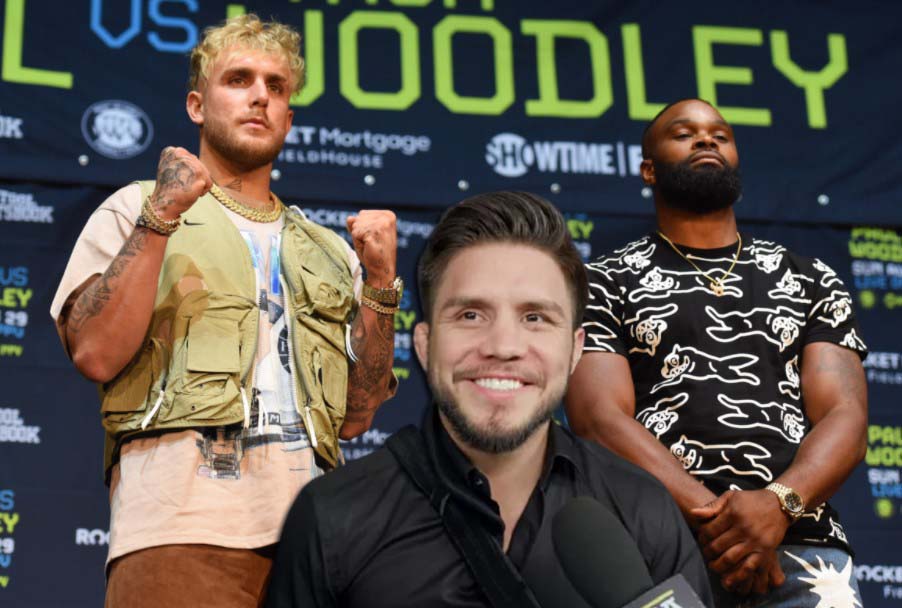 Henry Cejudo lately shared his thoughts on who wins between Jake Paul and Tyron Woodley and why he thinks so.

FightHype.com caught up with Henry Cejudo at Planet 13 with Mike Tyson, with whom he co-hosts the Hotboxin’ with Mike Tyson podcast. Cejudo was asked to comment on the highly-anticipated cruiserweight boxing match between Tyron Woodley and Jake Paul. The bout is set to go down on August 29 at Rocket Mortgage FieldHouse under the banner of Showtime.

Henry Cejudo picked Jake Paul as his winner. He said that ‘The Problem Child’ has good enough skills to be a ‘semi-amateur’ boxer, with all the top-class professionals he has around him for training:

“I think Jake Paul is going to beat Tyron Woodley. I really do, because boxing is different. If it was a four-ounce glove, then Woodley, but when it’s boxing, you got to give it to the dude that’s around world champions and training with people like that. He’s [Jake Paul] not bad, he’s like a mediocre amateur or a semi-amateur, you know what I’m saying? But he could crack and he has wrestled before, so he’s an athlete. He’s an athlete. He’s a little clumsy, though,” Henry Cejudo said.
Henry Cejudo also opined about former UFC champion Vitor Belfort’s upcoming boxing bout against Oscar De La Hoya:

“I think if anybody could beat any good boxer, it’d be Vitor Belfort. He has boxed before. He knows his biomechanics. He’s a real smart striking individual. His hands are second to none.”

Vitor Belfort is set to face Oscar De La Hoya in a Triller pay-per-view on September 11 in Los Angeles. Initially announced to be an exhibition match, it is now going to be a professional bout regulated by the CSAC at Staples Center.