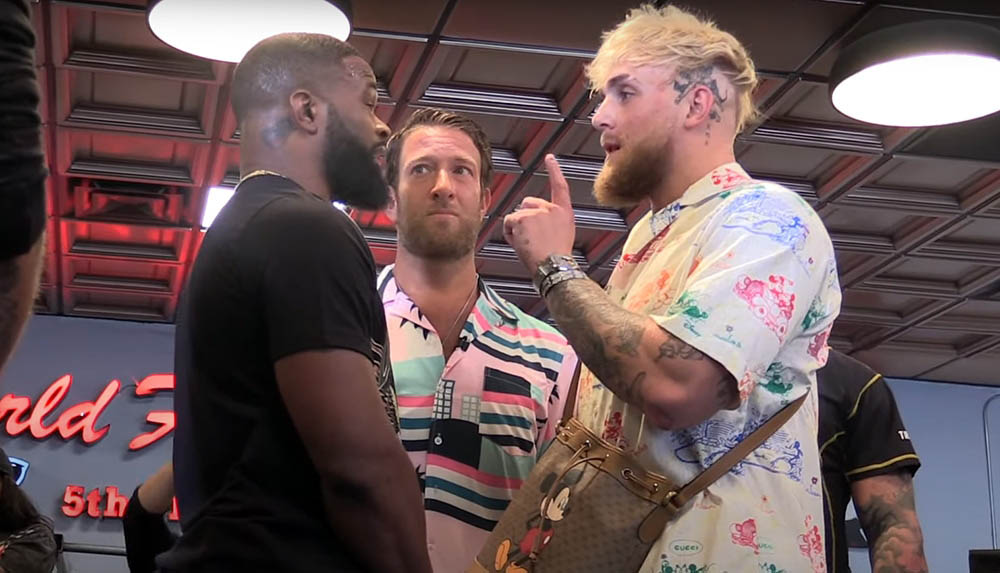 Jake Paul and Tyron Woodley are set to fight in a pay-per-view boxing match on August 28 on Showtime.

While in town for his brother Logan’s boxing match against legendary boxer Floyd Mayweather on Sunday, Jake came face-to-face with his next foe, former UFC welterweight champion Woodley at a pre-fight media event Wednesday.

Squared off by Barstool Sports founder Dave Portnoy, Paul and Woodley went eye-to-eye, chattering away as they posed for photos against one another.

Trash-talk aplenty, Paul and Woodley’s conversation (which can be seen above) included “Disney kid” references, agism, bad breath accusations, mentions of a “b * tch-out clause,” a hymen injury prediction, and more.

At one point, Paul offered to up the stakes. Paul’s new terms? If Woodley beat him, Paul would give Woodley an additional 100 percent of his purse. If Paul wins, Woodley would have to give his purse to Paul’s charity. Woodley did not accept or decline the offer, but responded with a chant of, “I’ll beat yo ass.”

The event wasn’t the first time Paul and Woodley had come in contact. Woodley cornered former UFC fighter and former Bellator and One Championship welterweight champion Ben Askren for an April 17 boxing match which Paul won by first-round knockout.

Woodley, 39, has not competed since he parted ways with the UFC and entered free agency earlier this year. His exit from his long-time employer came on the heels of four straight losses to Kamaru Usman, Gilbert Burns, Colby Covington, and Vicente Luque.

The Showtime event between Paul and Woodley does not yet have an officially announced location, but streams on pay-per-view.