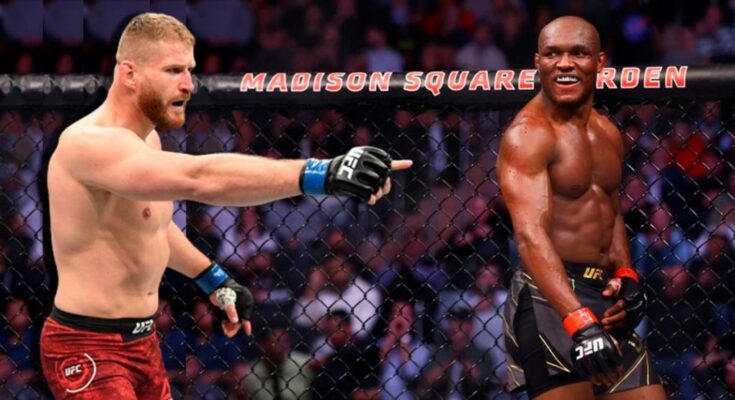 Jan Blachowicz is advising he’s open to fighting Kamaru Usman after the welterweight champion called him a favorable matchup.

The Polish fighter Jan Blachowicz has been out of the octagon since UFC 267 in October 2021. Blachowicz was submitted by Glover Teixeira at the event, losing his UFC gold in the process. The defeat was his first since 2018, a knockout loss to Thiago Santos.

Blachowicz is now set to return this weekend at UFC Vegas 54 against Aleksandar Rakic.

It was earlier this year that Kamaru Usman, who has defended his title five times since being crowned the welterweight champion, revealed he’s considering a two-division championship quest by skipping a weight class. Yes, “The Nigerian Nightmare” has his sights set on light heavyweight gold.

During a previous interview with ‘CBS Sports’ Usman had this to say about Jan Blachowicz:

“No disrespect to Jan. I think he’s a great competitor, he’s a very powerful guy, he’s got a lot of power in his hands, but I thought that was a matchup that favored me.”

During a recent interview with ‘The New York Post‘, Jan Blachowicz admitted that it would be a pleasure to fight Kamaru Usman, saying:

“He is the best fighter in the world right now, yes? That would be (a) pleasure for me to fight against someone like him. Why not? We can do it in (the) future. I will be ready. It will be (an) exciting fight.”

The former light-heavyweight champion stated that he expects the winner of this weekend’s headliner to receive a title shot. The light-heavyweight strap is on the line next month, as Glover Teixeira defends against Jiri Prochazka. Blachowicz also gave his thoughts on the UFC 275 headliner as well.

“I’m excited, I’m a fan of the sport, so I am excited. For me, it’s 50-50. If Glover takes him down, he will win the fight for sure. But Jiri is a crazy fighter, in a good way. You don’t know what he’s going to do, but it’s good for him and it’s working very good. We will see. If Glover fights strong like he did with me, he will defend the belt.”

Jan Blachowicz continued, “I hope so, for me it’s the right way [to get a title shot]. I’m number one, Rakic is number three, so who else? Me or him? Of course, me, is going to be next for the title fight. For the winner of [Glover Teixeira vs. Jiri Prochazka]. I think my style and Rakic’s it’s not going to be boring and close fight. It’s going to be a very tough, and short fight.”