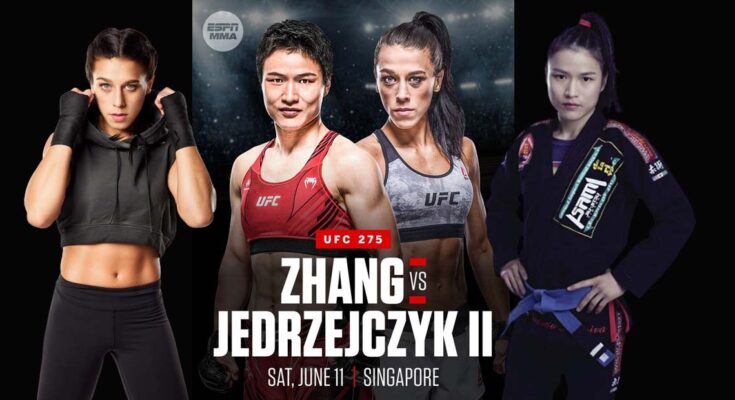 When Joanna Jedrzejczyk returns for her rematch against Zhang Weili at UFC 275, it will only be the fourth time in her UFC career she’s scheduled to go three rounds.

Between title fights and main events, the ex-strawweight champion has spent the majority of her time preparing to go 25 minutes, and she’s more than willing to do it again — but only under the right conditions.

Joanna Jedrzejczyk thinks going five rounds with Weili Zhang again is quite possible but she needs to see more green.

Jedrzejczyk and Zhang are expected to collide on the UFC 275 PPV. The strawweight rematch is only scheduled for three rounds. This came as a disappointment to many fans as their March 2020 five-round banger is widely considered to be one of the greatest fights in MMA history.

Speaking to MMAFighting.com, Joanna Jedrzejczyk said that she wouldn’t mind changing the terms of the bout for five rounds.

“It’s 33 percent more time spent in the octagon if I do five rounds instead of three,” Jedrzejczyk told MMA Fighting.

“Yeah, definitely, we will have to negotiate that, because I can fight, I want to fight five rounds. Let’s check the UFC’s position and Weili Zhang’s position, because a month ago, she turned down the fight. She didn’t want to fight and now we’re fighting.”

Joanna went on to say that she’ll need a sizable bump up in pay if she’s expected to go five rounds again.

“You change your training, your sparring a little bit, you put more effort into it,” Joanna Jedrzejczyk explained.

“We will spend more time in the octagon putting our health and lives on the line. So we definitely have to get paid a little bit more.

“We are negotiating so we will see. I’m open to it and I know that Dana White said they would love to work on it. We’re just waiting on a response. Let’s see.”

After recently inking a new multi-fight contract with the UFC, Jedrzjeczyk is happy with the terms as well as the money she’s being paid, which comes along with additional incentives from the promotion.

That said, Joanna Jedrzejczyk wants to ensure that the extra time she’d spend in the gym getting ready for a five-round fight — not to mention the potential damage she could absorb over 25 minutes — would be worth it.

To put that in context, Jedrzejczyk absorbed 170 strikes over five rounds in her previous fight with Zhang. In her three previous three round fights in the UFC, Jedrzjeczyk only absorbed 78 total strikes combined.

Joanna Jedrzejczyk hasn’t fought since that loss to Weili. Zhang has fought twice since then, losing twice to Rose Namajunas. With the first defeat to Rose, Zhang lost the UFC Strawweight Championship.