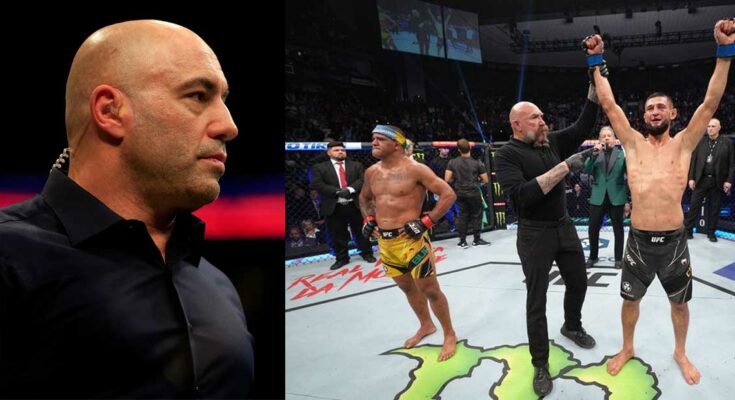 Joe Rogan has revealed what people and fighters have learned about Khamzat Chimaev after his UFC 273 victory over Gilbert Burns.

The top of the UFC welterweight is jam-packed with talented fighters. Following UFC 273, it seems that Khamzat Chimaev has drawn very close to title talks with his win over Gilbert Burns.

The fight between the two was a three-round barnburner that earned both men a Fight of the Night bonus. Although Khamzat came out on top on the judge’s scorecards, Burns may be receiving a nice opportunity for himself out of the loss.

Rogan believes Chimaev finally looked human. The podcast host also shared that even though we saw ‘Borz’ take more hits than he had in any of his previous fights, fans should not begin to underestimate him.

At UFC 273, Gilbert Burns stood across the cage from the hottest prospect in the UFC right now, Khamzat Chimaev. In his four fights before ‘Durinho’, ‘Borz’ had only received one significant strike. He also broke the record for the quickest fight turn-around in UFC history. 10 days.

Joe Rogan explained why he believes the fight got people more confident about fighting ‘Borz’ than they should be:

“That fight with Gilbert Burns got a lot of people brave. A lot of people were more brave after that fight because he looked human in that fight… The thing that we learned about Khamzat in that fight is that he’s not just a hammer. He can take it too. Sometimes a fighter is really good until someone puts pressure on them and then they fold up shop”

“We saw none of that with Khamzat. Gilbert spun his head around and it would have KO’d 99% of people on the planet. But after being wobbled and dropped, Khamzat immediately grabs a hold of his legs and takes Gilbert down. That’s how good he is.”

The two fighters put on a Fight of the Night performance that saw Chimaev win via unnaninmous decision. The bout was so good, in fact, that Burns took home a winner’s bonus despite losing.