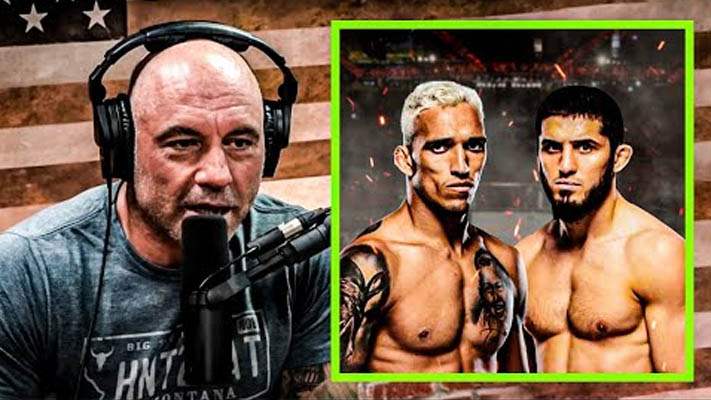 Joe Rogan recently sounded off on Charles Oliveira ahead of his match against Islam Makhachev at UFC 280.

Oliveira is all set to lock horns with Makhachev for the lightweight title at the main event of UFC 280. The event is scheduled for October 22 at the Etihad Arena in Abu Dhabi. The main card for this event is stacked with a bantamweight title clash between Aljamain Sterling and TJ Dillashaw as well as another bantamweight bout between Sean O’Malley and former champ Petr Yan.

In a recent video uploaded to MMA-INSIDE YouTube channel, Rogan discussed Oliveira’s upcoming lightweight showdown against Makhachev. The UFC color commentator is of the view that the Brazilian’s jiu-jitsu could prove to be a winning factor for ‘do Bronx’ in his upcoming bout. Rogan termed Oliveira’s jiu-jitsu skills as “world championship caliber,” saying:

“If you get a guy like Charles Oliveira who’s that good at jiu-jitsu, he could strangle a f**king heavyweight…Oliveira’s jiu-jitsu is some of the best I have ever seen in MMA. It is like world championship calibre jiu-jitsu, jiu-jitsu. But he’s doing it in an MMA match. He’s the one guy where it doesn’t matter what happens in the fight, if you go to the ground with him you are in deep s**t.”

You can watch Joe Rogan discuss the upcoming Oliveira vs. Makachev fight below:

Gordon Ryan had a historic victory over Andre Galvao, a legendary grappler, at ADCC 2022 via submission at the 16:04 mark of the match.

Speaking on the submission move on a recent episode of The Joe Rogan Experience, he said:

“What he did was, he traps his left arm with his left leg and then he traps his right arm with his left arm. So he’s one-arm strangling him and Galvao literally can’t defend… I’m not saying it’s not an awesome way to tap somebody, it certainly is. But that’s not the hardest he could do it. The fact that he can tap world champions with a technique utilizing a small percentage of the power that he would get if he fully locked in and clamped down on the head… I mean it’s wild. It’s a one-arm rear naked strangle is what it is.”

You can check out the clip below: