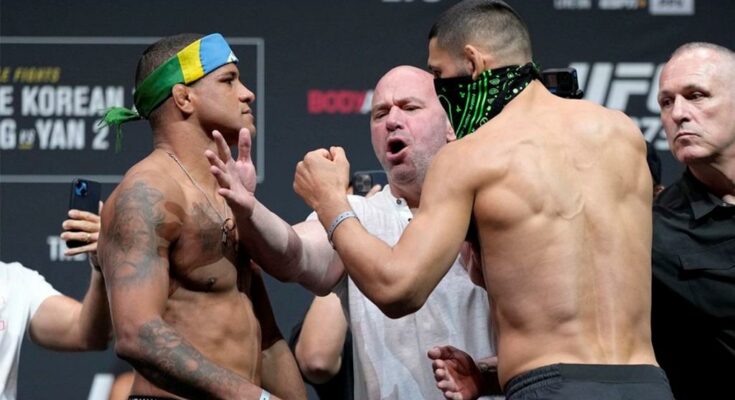 Before Khamzat Chimaev made the walk to the octagon at UFC 273, the Chechen-born Swede had fought four times in the UFC and had only received one significant strike.

The 28-year-old earned a Performance of the Night bonus in each bout and set the record for the shortest turnaround between fights in UFC history (10 days).

Fans were then stunned when Chimaev and ‘Durinho’ went the distance in what remains one of the most entertaining fights of the year so far. Both men had their moments in the bout but ‘Borz’ dominated the latter stages and walked away with a unanimous decision victory.

Khamzat Chimaev has been frustrated with the narrative following his Fight of the Night bout against Gilbert Burns.

Off the back of his performance, the 28-year-old admitted it’s been hard hearing doubts about his skills in the octagon, especially considering he won the fight:

“These things I don’t understand. When some people lose, why are they happy? People are saying ‘Oh Gilbert [Burns] did good, he did good!’ He’s been in the UFC years. I started fighting five years ago… I’m also human, you know. Everyone’s thinking I’m some kind of robot. Yes I speak hard when I go to the press conference, because I think I can, that’s why I say it.”

Khamzat Chimaev will face veteran Nate Diaz in a welterweight clash at UFC 279 later this year. It is the last fight of Diaz’s UFC contract and Chimaev will hope a victory will all but guarantee a shot at the 170lb title.

Although Gilbert Burns was certainly the toughest test of Chimaev’s career so far, the Chechen-born Swede is yet to face any fighter with as many fans as Nate Diaz.

The Stockton fighter’s devil-may-care attitude throughout his career and his refusal to be pushed around by the UFC hierarchy has made him one of the biggest stars in the organization.

The bout will not only be Chimaev’s biggest payday but could well be the first time the 28-year-old hasn’t been the fan favorite whilst stepping into the octagon. In the same interview with Ariel Helwani, ‘Borz’ said:

“It makes me even more famous when I beat him [Nate Diaz]. I don’t care so much about that [money]. I am happy with what I have now. If they give that [pay-per-view points], I will be happy. I hope so.”