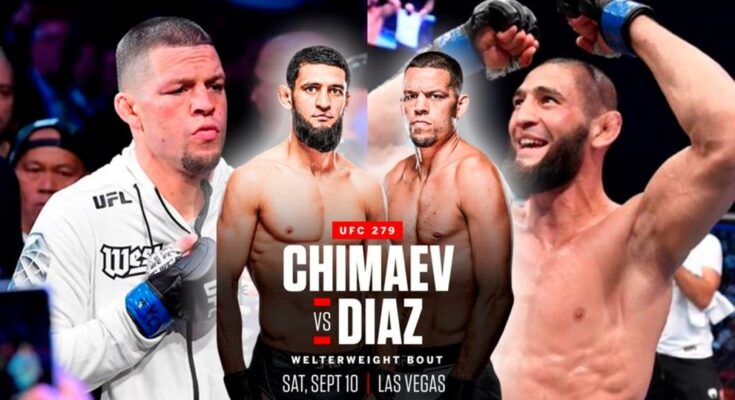 According to ESPN’s Brett Okamoto, Nate Diaz will headline UFC 279 on September 10 against Khamzat Chimaev. The event will take place at the T-Mobile Arena in Las Vegas, Nevada, and will serve as the final fight of Diaz’s contract.

“My objective is I want to get out of my contract and they are slow rolling me, trying to keep me in contract,” Diaz said to The MMA Hour. “I’ve been doing all I can, I’ve never asked for so many fights in my life… When I’m trying to make them happen, they are not letting me get in there and finish my contract…

“I just want to depart, I’m over the whole UFC roster as of right now,” Diaz continued. All the guys that they can offer or the guys I’m asking for everybody has been used and abused, it’s a recycled division, the lightweight and welterweight divisions (are) all recycled guys. I feel like there are no worthy opponents for me at the moment so I want to step out and recover from this whole shit. When the time is right, when there is a whole new batch of guys in here doing something good that is when I will be back… I don’t feel like I have anything else to do in the UFC. I’m ready to move on.”

On Tuesday, it was revealed by ESPN through Hunter Campbell of the UFC that Khamzat Chimaev is booked to headline UFC 279 against Nate Diaz.

The news came as a surprise as just a week ago Diaz said he hadn’t been offered any fights and just wanted to fight out his contract. Now, he will fight out his deal against Chimaev and the Swede is looking forward to it.

“I am going to handle Nate Diaz’s funeral with the UFC,” Chimaev said when asked about fighting Diaz.

This is a fight the UFC has talked about in the past so it isn’t a massive surprise to see the promotion book it. Chimaev has called out Diaz in the past but he didn’t think the Stockton, native would take it.

“No, it’s never been close [to a done deal],” Chimaev said on the Blockparty podcast. “The skinny boy, when I said let’s fight, I was good weight, good shape, and now I’ve been lifting weights, I go up like three kilos. Now he says let’s fight. He was thinking, is August too early to cut weight? I don’t care, I’m going to cut my weight and fight with him if he’s ready. I’ll smash that boy. He won’t be the same Diaz anymore.”

Khamzat Chimaev (11-0) picked up the biggest win of his career last time out as he beat Gilbert Burns by decision at UFC 273. The Swede is 5-0 in the UFC with wins over Li Jingliang, Gerald Meerschaert, Rhys McKee, and John Phillips. This will be the first five-round fight of his career.

Nate Diaz (20-13), meanwhile, suffered a decision loss to Leon Edwards back at UFC 263 last June and prior to that, lost by TKO loss to Jorge Masvidal for the BMF belt. In his career, he holds notable wins over Conor McGregor, Anthony Pettis, Jim Miller, and Donald Cerrone among others.