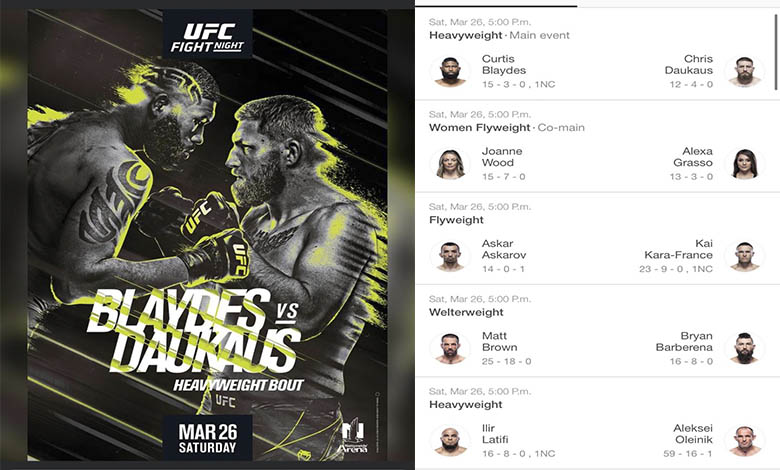 UFC Columbus is stacked with a host of intriguing matchups between top contenders from various divisions. It will be headlined by a heavyweight clash between Curtis Blaydes and Chris Daukaus.

Fight fans are in for a night of electrifying UFC bouts as the promotion hosts UFC Fight Night 205 in Columbus, Ohio this weekend. The event will be the first US-based Fight Night outside of Las Vegas since February 2020. The show will take place at the Nationwide Arena in Columbus and can be streamed live on ESPN+.

Initially, UFC Columbus was slated to be headlined by a light heavyweight bout between former champion Jan Blachowicz and Aleksandar Rakic. The fight was postponed and the promotion booked Blaydes vs. Daukaus as the new main event.

Men’s flyweight top contenders Askar Askarov and Kai Kara France will also come to blows on the main card. This will be followed by a women’s flyweight bout between standouts Joanne Wood and Alexa Grasso in the co-main event. Another notable fight on the card is the welterweight collision between UFC veteran Matt Brown and Bryan Barberena.

Curtis Blaydes has not knocked an opponent out since 2020. He’s coming in to UFC Columbus ready to put pressure on Chris Daukaus and hopefully score a KO win.

According to ‘Razor’, he knows that Daukus is a good boxer but can also take the fight to the ground with his jiu-jitsu. Nevertheless, Blaydes sees the fight not getting past the second round.

In a recent interview with LowKick MMA, he predicted:

“I know he’s a good boxer. He’s very orthodox, he doesn’t do a lot of crazy techniques. He believes in the basic, which is something I also believe in. I know he is also very good at jiu-jitsu, and I believe I’m the bigger – I’m faster, I’m more explosive. And obviously, I believe I’m the better grappler… I win the first two rounds, I put the pressure on him, and he has to open up. And I catch him on the feet, so I believe I get the finish.”