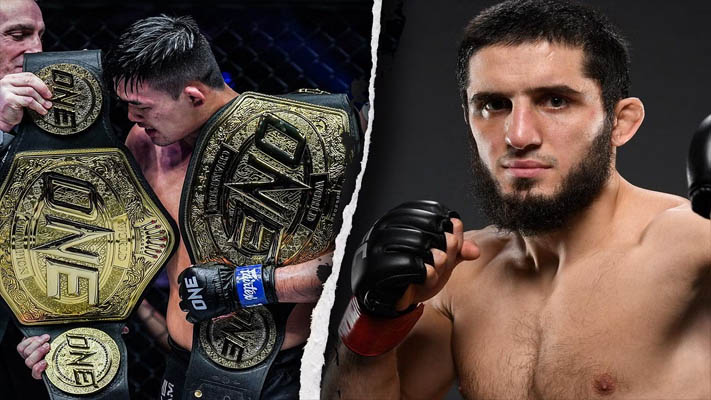 After becoming a two-division world champion at ONE on Prime Video 4, Christian Lee is ready to mix it up with another organization’s champion.

He gave an interview with the South China Morning Post following his incredible fourth-round knockout of Kiamrian Abbasov to capture the ONE welterweight world championship.

‘The Warrior’ spoke about a hypothetical dream fight between a Russian MMA star and Khabib Nurmagomedov’s protege, Islam Makhachev.

“Let’s do it, let’s break some records. I think a fight between the ONE world champion and the UFC world champion would create massive hype. I think that it would make for the biggest MMA fight the world’s ever seen.”

“I know my potential opponent, Islam, would be down for a fight like that. He’s a true competitor like myself. But then it all comes down to the promotions. We’ll see if they’re both able to come together and make a fight like that happen, because I definitely think it would be huge.”

Makhachev was inside the Singapore Indoor Stadium on Saturday. He worked the corner of Saygid Izagakhmaev, who earned the biggest win of his career against Asian MMA legend Shinya Aoki. With Izagakhmaev’s victory, he is largely considered the next logical opponent for Christian Lee in the lightweight division.

Saygid Izagakhmaev was not amused with Christian Lee taking the time to talk about a fairly unlikely meeting with another promotion champion. Lee already has a clear lightweight world title challenger waiting in the wings. During his own interview with SCMP following ONE 163, Izagakhmaev said:

“I think Islam [Makhachev] has [Alexander] Volkanovski and Christian [Lee] has me. He needs to focus on me and there’s no reason for him to think about fighting Islam.”

Fantasy matchmaking has always been a fun conversation in combat sports. However, Saygid Izagakhmaev doesn’t see the point when there is a business to handle between the two lightweight stars.

Christian Lee won the ONE welterweight world title at ONE on Prime Video 4. It remains to be seen if Izagakhmaev will be the next man to challenge ‘The Warrior’ inside the Circle. However, given their acknowledgment of one another in recent months, it is clear that they are on an undeniable collision course.