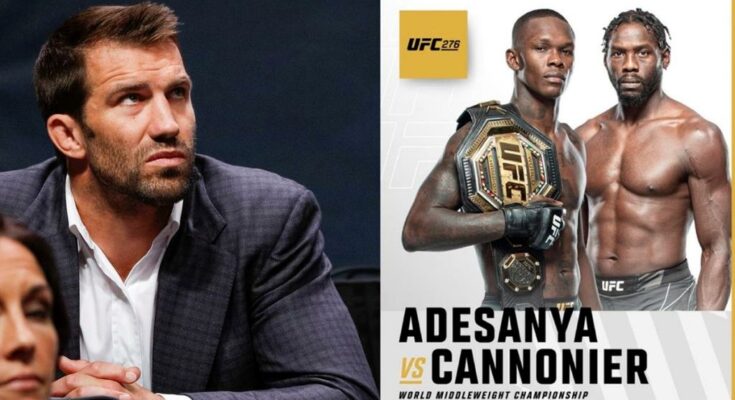 Israel Adesanya is all set to lock horns with Jared Cannonier in the highly-anticipated main event of UFC 276.

The fight, which will mark the Nigerian-New Zealander’s fifth title defense, is scheduled this Saturday at the T-Mobile Arena in Las Vegas.

Former UFC middleweight champion Luke Rockhold firmly believes that he’s the only 185lber capable of beating Israel Adesanya. He made the claim while predicting the upcoming title bout between Adesanya and Jared Cannonier at UFC 276.

In a recent interview with Mike Bohn of MMA Junkie, Rockhold claimed that only he possesses the right tactics required to take on a skilled fighter like Israel Adesanya.

Sharing his thoughts on the current middleweight champion, the 37-year-old Luke Rockhold said:

“I think Izzy is a great champion. I think he has a good character… I like Izzy, I’m not gonna lie. I want to fight him for sure… I think I am the only one who can beat Izzy and play the right tactics, and I got that fight.”

While praising Adesanya’s stand-up fighting abilities, Rockhold argued that ‘The Killa Gorilla’ lacks a “solid top game” to compete with ‘The Last Stylebender’. As a result, the former middleweight champion suggested that Adesanya has a clear edge heading into this Saturday’s event:

“I think he [Israel Adesanya] wins this fight. I mean, Jared Cannonier throws hard. He could hit a leg in the wrong spot, you never know, or hit something wild. But I think Izzy’s range and his dynamicness is going to be too much. Getting Jared try to take him down, he doesn’t have enough solid top game to hold him.”

Luke Rockhold has been out of action for quite some time now. The former middleweight champ was last seen inside the octagon at UFC 239 back in 2019.

After a three-year hiatus, news broke that the American is finally ready to get back into action as he was booked against Sean Strickland at UFC 268. However, Rockhold was forced to withdraw after suffering a herniated disc in his back.

His comeback has now been re-arranged, with Luke Rockhold being booked against Paulo Costa for UFC 278 on August 20.