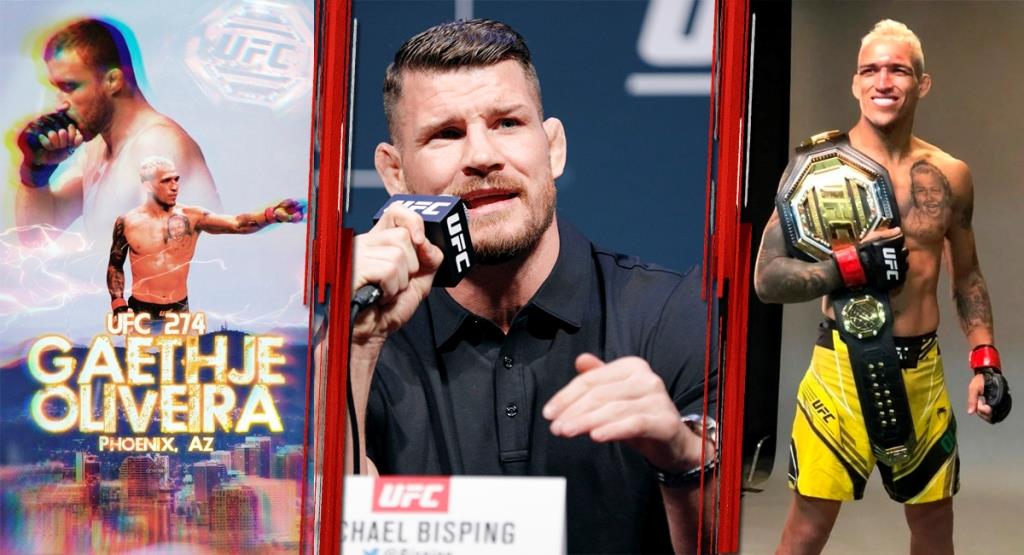 Michael Bisping is on a mission to make UFC fans open their eyes to just how good lightweight champion Charles Oliveira is.

The former UFC middleweight champion’s latest YouTube video is an eight minute breakdown laying out why Oliveira is undoubtedly one of the best fighters ever. He said:

“Sometimes people don’t appreciate the talent that’s right before them. Listen, maybe that’s because Khabib [Nurmagomedov] in a lot of people’s eyes is still classed as the champ. He retired on top so some people might still think that. But they need to get over that, they need to get a grip.”

Bisping’s argues that Oliveira is a ‘tough bastard’ that has ‘completely re-invented himself’ and built up a record for the most submission wins ever. And the numerical superiority just continues from there.

“The numbers don’t lie and when you look at the numbers, the man has had twenty wins in the UFC. Eighteen of them have come by way of stoppage. That is a 90% finish rate which is absolutely phenomenal. Need more? The man has the most post-fight bonuses in the history of the company as well coming in at eighteen. Twelve performance of the night bonuses, three submissions of the night and three fights of the night. The stats don’t lie, he’s one of the most exciting ever, and one of the best ever.”

Charles Oliveira is set to fight Justin Gaethje for his second lightweight title defense at UFC 274. That fight goes down on May 7 from the Footprint Center in Phoenix, Arizona.

Alexander Volkanovski looked unstoppable at UFC 273 as he dominated ‘The Korean Zombie’ Chan Sung Jung en route to a fourth round stoppage win. Following the fight ‘The Great’ suggested he might move to lightweight if there wasn’t any clear contenders at featherweight to fight next.

One potential opponent would be lightweight champion Charles Oliveira. Michael Bisping broke down a potential superfight between the two, saying:

“Oliveira, yeah… You don’t know, but Charles Oliveira’s something special. The career resurgence that he’s had is phenomenal. What he’s been through, what he’s done, the ups and the downs, the losses at 145, goes up to 155, goes on a tear, right? Who did he beat? Michael Chandler. Became the champ. Beats Dustin Poirier. Now he’s fighting Justin Gaethje. I mean, it’s unreal. So I find it hard to bet against that guy right now.”

Sportsbooks are finally starting to side with Oliveira as well. For his UFC 274 fight against Justin Gaethje, he’s a betting favorite for the first time in three fights.