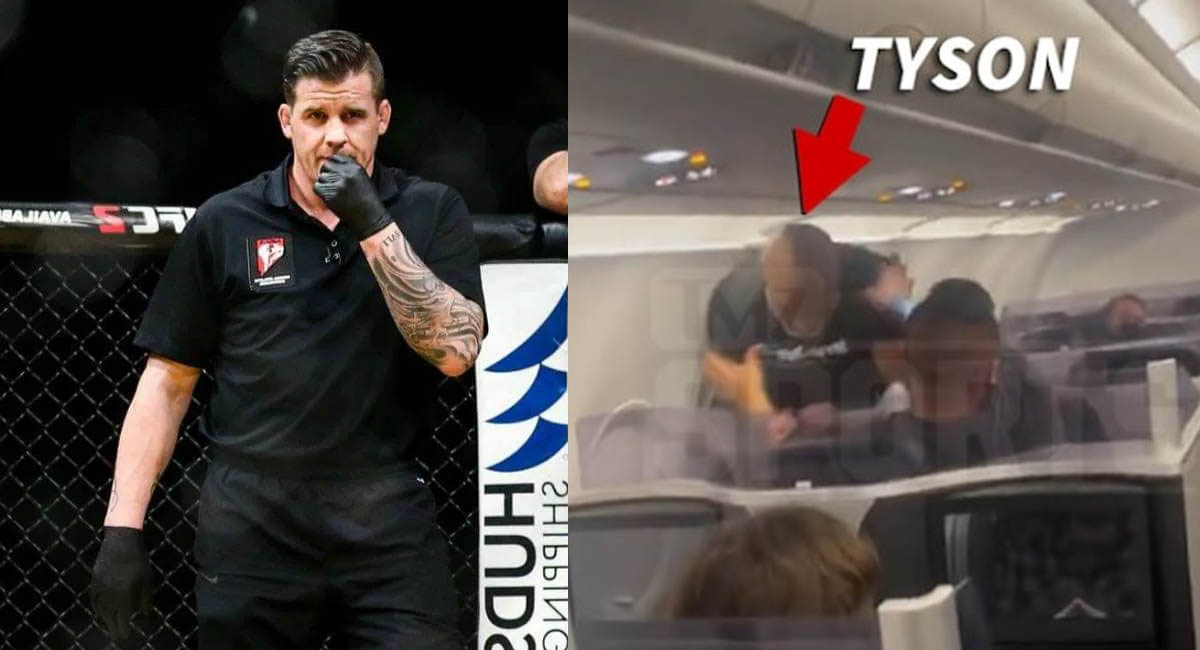 The footage, initially shared by TMZ, includes multiple short clips of an unidentified man in the seat behind Tyson talking to him excitedly. The next clip shows the man looking sad and dazed with blood on his temple. The final clip shows Tyson hitting him repeatedly as a third person attempts to intervene.

Goddard is one of the UFC’s finest referees. He isn’t afraid to jump on Twitter and defend a controversial call he makes in the octagon, and in this case he came out in solid defense of Tyson. He wrote:

“Social media & ‘news’ at its finest! So many video clips of Mike Tyson punching the passenger on the plane – but show the whole video & lead up that’s out there of a drunk man harassing, not the last 30 seconds with the click bait headline!”

In response to someone suggesting Tyson should have dealt with the situation differently, Goddard added:

“I’m not condoning & I’m not condemning. But I think you’ll find that’s EXACTLY how society “can” work and it might be a darn better place for it. Act a disregarding disrespectful fool & you “may” face a differing consequence than a stern word!”

According to TMZ, sources close to Tyson have said the man was ‘extremely intoxicated’ and refused to leave the boxing legend alone.

Mike Tyson has a reputation from his days in the 80s and 90s as an angry and violent individual. However, that’s no longer the case as the 55-year-old has chilled out a lot in his later years.

Recently at a Hollywood comedy club, Tyson was approached by a man who demanded they fight and drew a gun. It’s unclear exactly what Tyson said to calm the situation down, but the man ended up putting the weapon away and accepts a hug from the former heavyweight champion.

A story from 2019 that claimed Mike Tyson punched The Game’s manager Wack100 over comments about 2Pac also turned out to be a prank. So while it’s clear from this latest airplane footage that Tyson shouldn’t be messed with, the boxer turned podcaster isn’t known for lashing out violently these days.