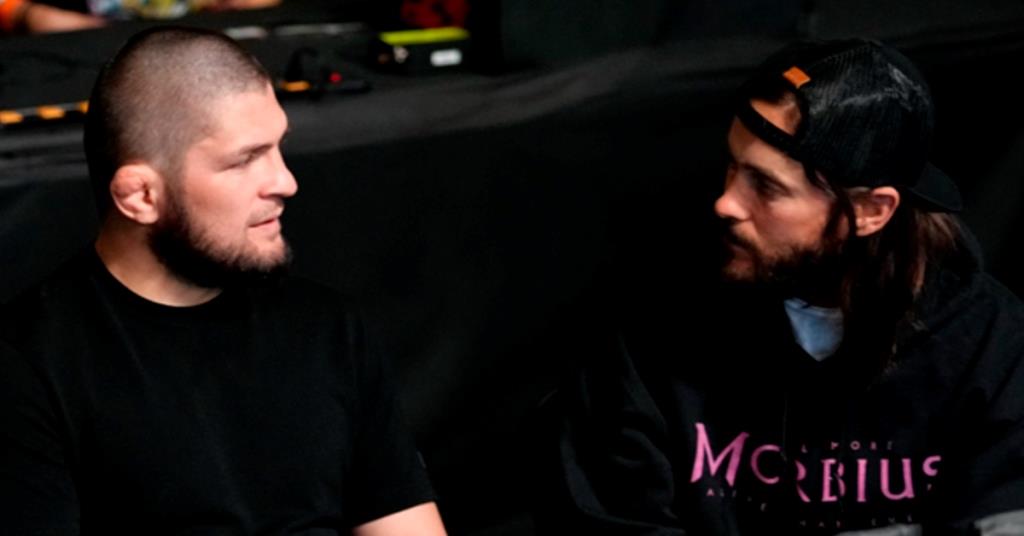 MMA fans intrigued as Khabib Nurmagomedov seen deep in conversation with Jared Leto. The UFC lightweight icon was seen alongside the Hollywood star in Vegas.

As cageside conversations go, it would have made for interesting listening as Khabib Nurmagomedov was seen chatting away with movie star and musician Jared Leto at the UFC’s event at its Apex center in Las Vegas on Saturday night.

Cameras captured the pair deep in conversation before Leto gestured by pointing and clenching his fist, and the former UFC ruler was seen smiling. UFC boss Dana White was also seated nearby.

It may have seemed an unlikely collaboration but Hollywood heartthrob Leto, 50, is an avid UFC fan and regular visit to the promotion’s events.

After the images were shared online, MMA fans expressed how much they would love to have been privy to what exactly was being discussed between the 29-0 Dagestani destroyer and the star of upcoming Marvel superhero offering ‘Morbius’, who is also lead singer of rock band ‘Thirty Seconds to Mars’.

Some wondered whether Khabib Nurmagomedov in fact knew who Leto was, after recently admitting his knowledge of popular culture might be lacking as he didn’t have a clue as to the identity of rapper Drake during the infamous melee following his fight with Conor McGregor back in 2018.

Khabib Nurmagomedov has rubbed shoulders with Hollywood royalty before though, enjoying dinner in Paris with Leonardo DiCaprio after they watched a football match together in the French capital not long after the Russian star had beaten McGregor.

Khabib Nurmagomedov used his time cageside on Saturday night to express his admiration for American UFC veteran Jim Miller, after the 38-year-old rolled back the years to land a brutal finish of rival Nikolas Motta.

Khabib, 33, is currently Stateside again as he continues to push his own MMA promotion, Eagle FC, into the US market.

The company is planning its second US event in Miami on March 11, headlined by a clash between former UFC stalwarts Kevin Lee and Diego Sanchez.

“I just want to become the best,” Khabib recently told Sky Sports regarding his plans as a promoter, having hung up his gloves after defeating Justin Gaethje in October of 2020.