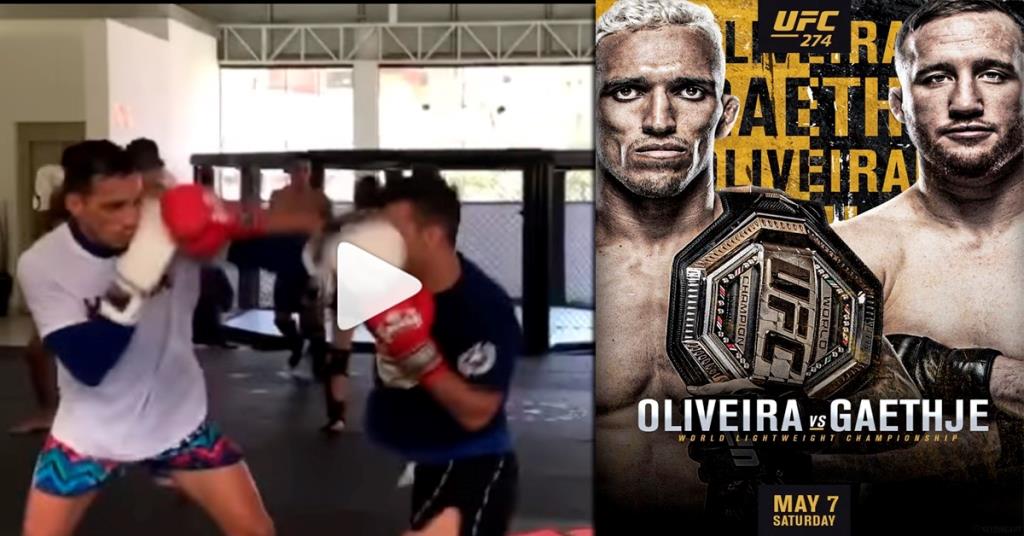 Charles Oliveira has showcased a fast-paced sparring session before he goes to war with Justin Gaethje.

Oliveira is set to put his UFC Lightweight Championship on the line against Gaethje in the main event of UFC 274. The matchup is set to take place on May 7.

Initially, Gaethje was hoping to meet Oliveira in Brazil. This is what he told BT Sport.

“There’s a card in Brazil on May 7th. I want to fight the Brazilian champion, in Brazil. I want the chaos.” – Gaethje said when asked about a potential fight date against Charles Oliveira.

Raphael Marinho of Combate poured cold water on that idea as UFC 274 will not be taking place in Brazil. The event is expected to take place somewhere in the United States.

Charles Oliveira is well aware of the pressure that Gaethje puts on his opponents. “The Highlight” has been known to move forward and throw some heavy punches. He’s also got some solid leg kicks and has demonstrated superb takedown defense against just about everyone not named Khabib Nurmagomedov.

Oliveira is fresh off a successful title defense against Dustin Poirier. The bout took place back in Dec. 2021 and it ended in the third round when Oliveira submitted “The Diamond” via rear-naked choke.

As for Gaethje, he’s gone 5-1 in his last six outings. The only loss in that span was to Nurmagomedov, who is considered an all-time great. Gaethje got back in the win column in his Nov. 2021 slugfest against Michael Chandler.

It has become apparent that “do Bronx” is doing his best to prepare for Gaethje. The 155-pound king released sparring footage on his Instagram account and it’s obvious that his training partner is emulating Gaethje’s style.

Watch the video on which Charles Oliveira shares intense sparring footage ahead of title fight with Justin Gaethje: