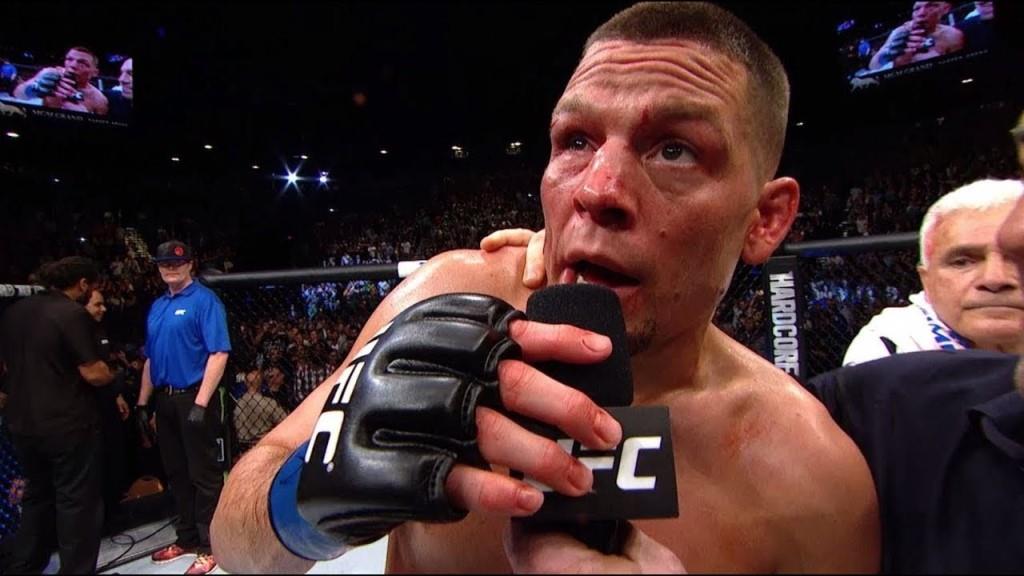 American mixed martial arts fighter Nate Diaz fought his first fight since November 2019 at UFC 263 and was defeated by unanimous decision from Briton Leon Edwards. At a post-match press conference, Nate revealed when he was going to return to the octagon.

Diaz (20-13 MMA, 15-11 UFC) offered a classic response to his unanimous decision loss to Edwards (19-3 MMA, 11-2 UFC) on Saturday at Gila Rivera Arena, where he got convincingly bested in the first four rounds before staging a late rally in the fifth, where he couldn’t finish the fight.

The fight was originally supposed to take place at UFC 262 in May, but Diaz revealed that a cut in training postponed the fight. He claimed he lacked motivation, and that’s why he wasn’t as sharp as he should have been. Still, he thinks his big moment was the defining moment of the fight.

“I got cut in training, that’s why we had to push the fight back for a month,” Diaz told reporters, including MMA Junkie, at the UFC 263 post-fight press conference. “I kind of lost all motivation to train and work out hard and all that, so I kind of just lingered around for a month to get ready for war like that. At the end of the day, I feel like he won or whatever, but I feel like I’m the better fighter still regardless, and I feel like the peak of the fight is what matters anyway in the end.

“No hate on Leon, congratulations to him and why would you fight anybody but the top guy if you’re going to fight at all,” Diaz said. “I wish it would’ve went my way, but it’s all good.”

Diaz said Edwards put up a good fight, but said if there were more rounds, it would’ve swung in his favor.

“Fight was a wrap,” Nate Diaz said. “In a real fight in the real world, that’s a wrap. So, yeah. He was sleep-walking.”

Diaz went into his game plan in the aftermath of the result and said he managed to go through with little issue, despite suffering a nasty cut in the cage.

“I just kind of winged it,” Diaz said. “I was just kind of walking through that fight to get to the next opponent in this whole game. I didn’t feel like I was really in any danger. Of course, I got cut and that f*cking sucks, but I wasn’t motivated in training and I was just trying not to use any energy anywhere. Was just kind of in cruise control.”

Despite the loss, Diaz came out of UFC 263 still feeling like a star. He got the biggest positive reception of any fighter from the crowd, and at this stage has reached a point of status where wins and losses don’t mean much.

As far as what’s next, Diaz said he’s not pinpointing any particular opponent. He said he’ll do whatever “makes sense,” but the one thing he’s focused on is the timeline, and that means getting back into the octagon as soon as possible.

“I want to fight in three or four months,” Nate Diaz said. “I’m ready to get back in there. Just to heal up. If I was unscathed I would be back in next week. I just wasn’t motivated to train anymore because I already put in the hard work for the next fight in Texas where it was supposed to be. It had to linger on for another f*cking month and it just sucked so I just rolled with the punches and did what I had to do to get here.”