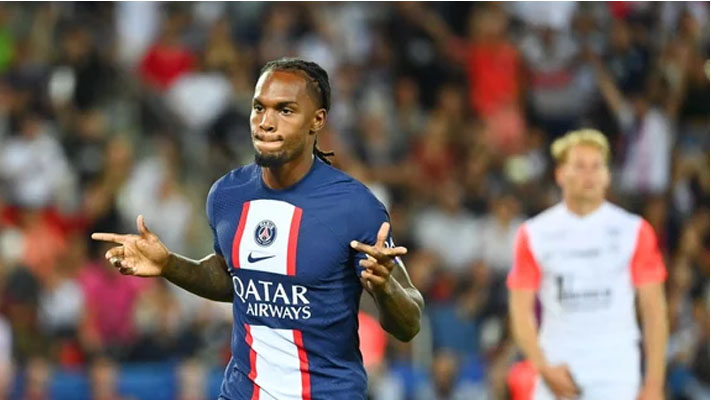 Paris Saint-Germain (PSG) midfielder Renato Sanches has claimed that his new teammates Vitinha, Danilo Pereira, and Nuno Mendes have helped him settle into his new surroundings in Paris.

Sanches, 25, joined the Parisians from Lille for a fee of €15 million earlier this summer, penning a five-year deal. Along with other new signings Carlos Soler and Fabian Ruiz, he is set to help his new club navigate through the schedule of the FIFA World Cup-interrupted season.

A box-to-box operator with considerable dribbling prowess, the Portuguese midfielder shot to fame during his time at his boyhood club Benfica. After lifting two Bundesliga titles with Bayern Munich, he joined Lille in the summer of 2019.

He netted seven goals and contributed 10 assists in 91 appearances for his former Ligue 1 club.

In an interview with Le Quotidien Du Sport, Sanches was asked whether having his Portugal teammates at the Parc des Princes had initially helped him find his bearings. He responded by saying:

“Of course. It was a good thing and a big help. Especially since we speak the same language. This is also valid with other players who are not Portuguese.”

“I’m with a good group and good people. Some that I have known for many years [like Danilo and Mendes]. Even Vitinha, I was able to get to know him. We all had a good relationship from the start.”

“Everything is going well. I’m happy to be a part of this team. To be honest, it wasn’t difficult either. I feel like it’s getting better and better as the weeks go by. But I’m happy with my choice.”

Speaking about PSG’s start to the season, he said:

“We feel good together. We play well and that translates into good results. I am convinced that we can do even better and achieve a good championship.”

Sanches, who is currently recovering from a muscle injury, has featured in just 176 minutes of action across six matches this campaign.

PSG, who are on an unbeaten run in Ligue 1 this season, will next take on OGC Nice at the Parc des Princes on Saturday (October 1).

According to Calciomercato, PSG are monitoring the situation of Juventus midfielder Adrien Rabiot. They have been in touch with their academy product to discuss the possibility of a return. The 27-year-old will be available for a free transfer next summer.

Since joining on a free transfer in 2019, Rabiot has proved to be an underwhelming signing for the Bianconeri. He has registered six goals and six assists in 133 matches across all competitions.