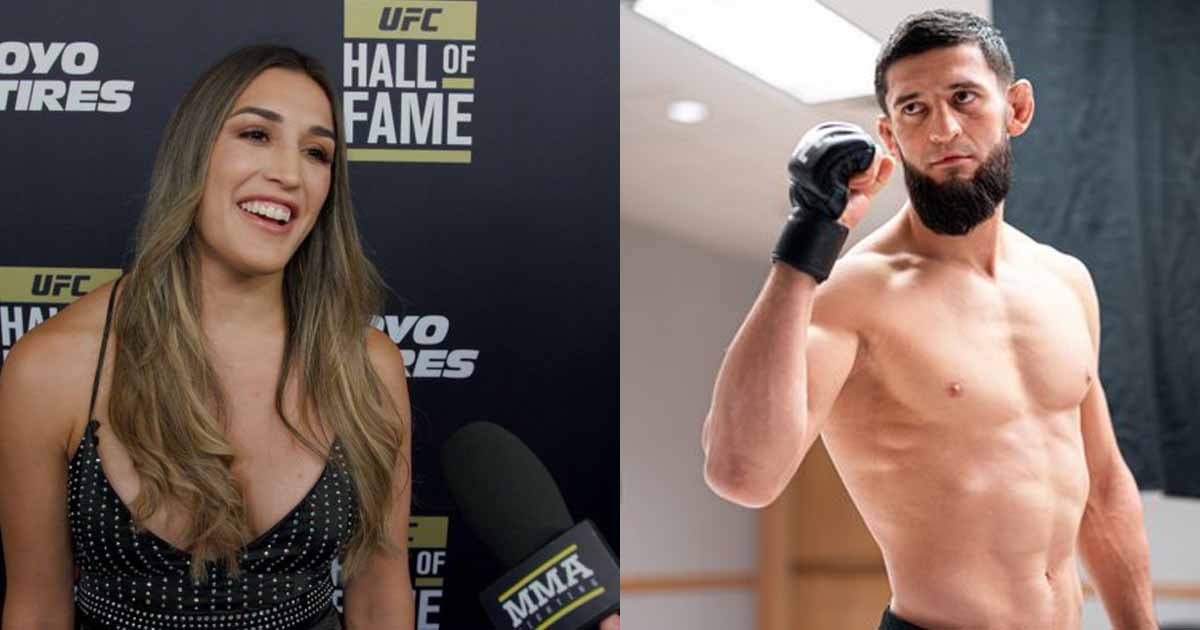 Tatiana Suarez recently revealed details of her unorthodox friendship with Khamzat Chimaev. According to Suarez, Chimaev has a slightly eccentric personality that is probably the reason behind his excellence as a fighter.

Suarez also claimed that ‘Borz’ kicks her shins whenever they meet at the UFC Performance Institute. Additionally, the 31-year-old recalled a recent incident when Chimaev tried to wrestle her in the sauna. The undefeated UFC strawweight told Helen Yee:

“He’s obviously amazing. He is extremely crazy. I mean he just comes up and kicks me randomly. I’m like, ‘What is going on, why are you kicking me?’ He’s a little nuts but maybe that’s why he’s so good… Whenever he sees me at the PI, he just comes and kicks me with like shins on shins… The other day he was trying to wrestle me in the sauna, I’m like, ‘Let’s not do this right here.'”

Khamzat Chimaev is scheduled to meet Gilbert Burns at UFC 273 this weekend, where a win will propel him closer to title contention. Chimaev’s friend, Tatiana Suarez, recently weighed in on his upcoming encounter with ‘Durinho’.

According to Suarez, Burns is going to be a tough test for Chimaev with his well-rounded skillset. She also believes that the fight against the former title challenger will answer doubts about the Russian-born Swede’s hype.

“He’s [Chimaev] a very big welterweight. But you know, Gilbert, he has a lot of power in his hands. I’m looking forward to seeing how well Khamzat deals with the forward pressure of Gilbert, because he has strong striking. And also he has good grappling. So I’m excited to see Khamzat grapple someone with really strong grappling… I think it’s a test… I think it will clarify a lot of things in a lot of people’s minds. Not only that, I think it’s a great matchup because Gilbert is a very well-rounded fighter. You know, he has power, he has good grappling, so I think this will just show.”

Tatiana Suarez last fought in 2019, when she earned a decision win against Nina Nunes. Although undefeated, her professional career has been plagued by injuries, leading to a substantial amount of time spent away from active competition. The TUF 23 winner is targeting a return to the octagon after almost three years on the sidelines.

Watch Tatiana Suarez discuss her friendship with Khamzat Chimaev below: