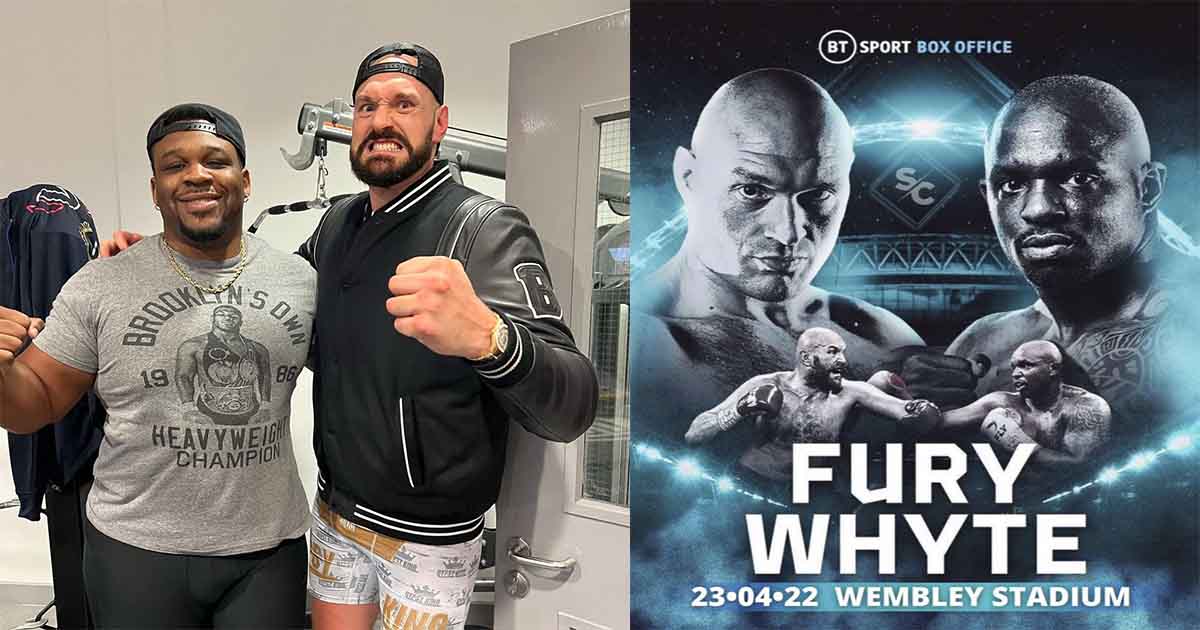 Tyson Fury is facing Dillian Whyte later in the month of April in the first major boxing bout since the Covid-19 pandemic started. If a Heavyweight champion would bring folks back to Wembley for a new fight, it had to be the Gypsy King.

Fury has been getting ready for this mandatory contender in order to maintain his belts while the Usyk vs Joshua fight happens and he can get a rival to unify all the belts. While he waits, Fury will have all the fun he wants poking at Whyte before the fight.

Bullying from Tyson ranges between posting images of his rival in knickers to going to a ‘ghost’ press conference that only he attends. You gotta give Tyson props for making this effort with his marketing team, who are doing a brilliant job by provoking rivals.

Take a look at Fury’s latest update on the fight and what he plans to do to Whyte:

“Dillian Whyte is getting knocked out man! Camp is going tremendous and cannot wait from my homecoming at the big smoke. All of my loyal fans are in for a treat, I’m going to put on a monster show Wembley Stadium.”

With the fight taking place on April 23, tickets sold out and in less than two hours at the start of March. This prompted organizers to ask for a capacity extension that was officially approved on Tuesday, they announced it through all the channels.

Fury himself confirmed that 94,000 people will be allowed at Wembley Stadium, setting a record for the boxing match with the highest number of attendees ever in British boxing history.

Tickets are expected to go on sale next Wednesday, they will likely also sell out within minutes. Everybody wants to see Fury defending his titles, especially after that unforgettable trilogy against Deontay Wilder.

Also, the official undercard was revealed from this fight and we have an interesting surprise amongst the names. Out of all the fights that are taking place in this night, Tommy Fury (Tyson’s brother) is fighting Daniel Bocianski, a Polish veteran boxer.

The idea is to get Tommy active again after he pulled out from a potential fight against Jake Paul last year. He suffered a punctured lung and a broken rib that forced him to pull out of that fight. Winning this one could propel him to possibly take on ‘The Problem Child’ once and for all.

But the main event will be the one everybody is talking about despite Tyson fury’s evident stance as the favorite to win by knock out.