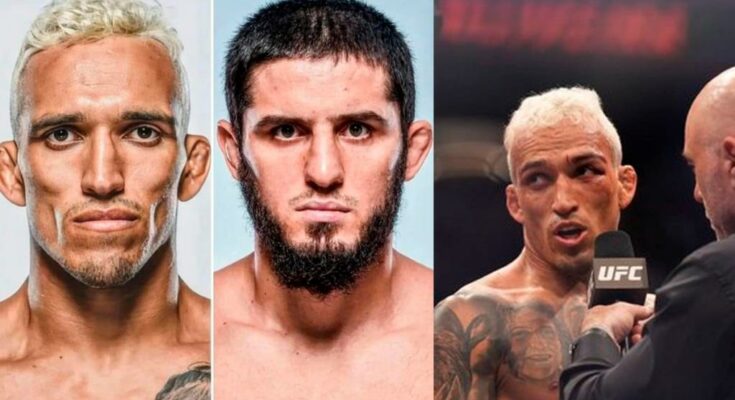 Charles Oliveira is unbeaten in his past 11 fights.

In a stunning turn of events, Oliveira missed weight on his first and second attempts. As a result, he will be forced to vacate the title once his UFC 274 headliner against Justin Gaethje begins. If Oliveira wins, the belt will remain vacant. If Gaethje wins, he will become champion.

The Brazilian lightweight submitted Justin Gaethje in the main event of UFC 274 at Footprint Center. Oliveira (33-8 MMA, 21-8 UFC) forced Gaethje (23-4 MMA, 6-4 UFC) to tap with a rear-naked choke after wild back-and-forth exchanges in the first round of their contest.

With the lightweight title currently vacant, Oliveira (33-8 MMA, 21-8 UFC) will serve as one half of the next title fight. Makhachev has been chomping at the bit for his shot, but Oliveira doesn’t think he’s earned it.

“I’ve never ran from a fight and the lightweight champion is called Charles Oliveira,” Oliveira said in an interview with ESPN Brazil (h/t ESPN). “Is Islam a very tough guy? Yep. Did he fight big names? No. He’s on a big streak, but who did he fight?”

No one has had an answer for Islam Makhachev (22-1 MMA, 11-1 UFC) on the ground, but the UFC’s all time leader in finishes and submission wins isn’t the least bit intimidated.

“I don’t care about his fighting style,” Oliveira said. “What he does best, I do 10 times more. If he thinks that putting down everyone (on the ground) he (fought) is the same thing as (fighting) Charles Oliveira, he is completely wrong.”

“It would be a very good fight for me,” Oliveira said. “It would put a lot of money in my pocket, and (at this moment) that’s the most important thing. And it would also be really good for my legacy, for me to have in my story. Regardless, if he’s coming from defeat or not, he’s a guy who’s made history, so I think it would be great. But it’s not just up to me. If it were up to me, this fight would already be happening.