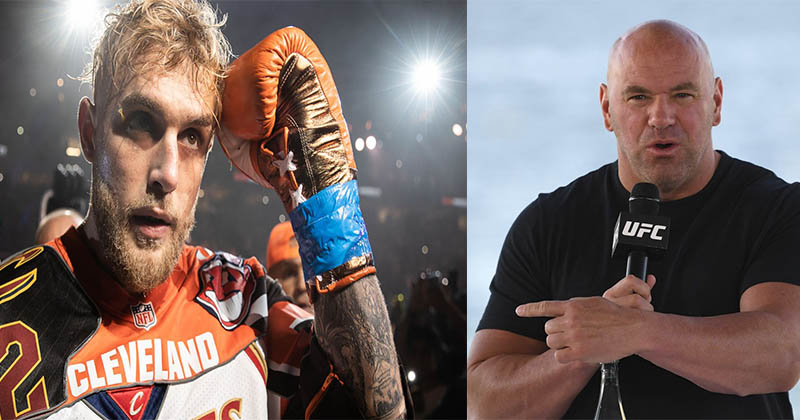 UFC President Dana White once again spoke out about YouTube blogger Jake Paul, with whom he has been having a conflict in the media space for some time.

Recently, UFC President Dana White has been under pressure with questions about Jake Paul as well as about the leading MA stars he promotes.

A youtuber turned professional boxer, Paul made a name for himself by knocking out the first three opponents, he faced in a friendly match with YouTuber AnEsonGib, former NBA star Nate Robinson and former UFC veteran and ONE champion Ben Askren.

He also hit the headlines with a question about how little White pays MMA fighters.

When asked if Paul owns the real estate in White’s head, the executive said that hype is expected.

“Nah. Listen, that’s all part of the business,” White told the Full Send Podcast. “You want to get noticed? You want to stir up some sh!t? Start a fight with me. That’s how you do it.

“Yes {he impressed me with the Askren victory.} He knocked Askren out with one f***** punch … I thought Askren should have done better than he did.”

This time, Paul faced difficulties when he was rocked in the fourth round, and fought his way to victory in eight rounds by split decision.

White said that Paul needs to fight with real boxers to prove that he has a real boxing talent.

“In the gym, he trains with plenty of boxers. So there’s a reason he’s not fighting boxers. He wants to keep fighting these retired UFC f***** wrestlers,” said White.

The conversation also covered the topic of White and Paul potentially working together.

“Listen, I never say never, but I highly doubt [working with Paul]. It’s just not what I do. There’s a market for that. He could fight a different type of celebrity every week, and there’s going to be a segment of the population that wants to pay for that and see it, but that’s not what I do. I put the best against the best.

“The media isn’t really following him as much as they did in the beginning. The schtick is getting old. I think for him to get the media back, he’s gonna have to fight somebody. They’re tired of the schtick. ‘Hey, it’s me, I weigh 190, and I want to fight these guys that weigh 170, 155, and they’re wrestling, and they’re 40 f***** years old, and they haven’t won a fight in three f***** years.’

“If he wants to be taken seriously now by the real media, I think he needs to fight a real fight.”