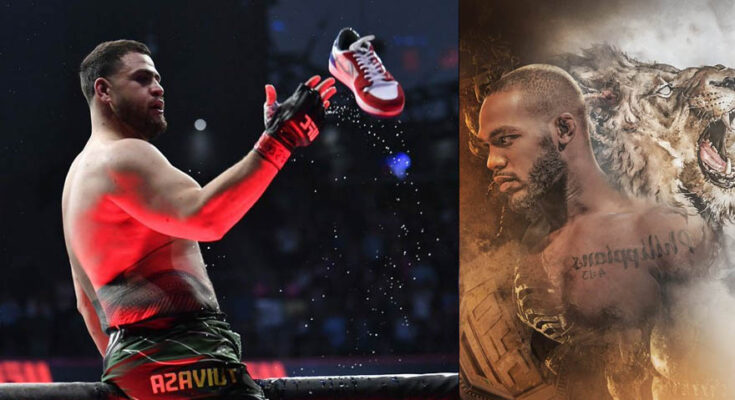 UFC heavyweight Tai Tuivasa hopes to one day share the Octagon with former champion Jon Jones, whom he considers the greatest mixed martial artist in history.

Jon Jones is set to move up to heavyweight and the rumors of his abilities have been swirling. Tai Tuivasa, a potential opponent, had quite a lot to say about the former UFC light heavyweight now that they’re in the same weight class.

There are a lot of questions about Jon Jones’ greatness and many are curious to see how he would do at heavyweight. Tai Tuivasa can’t help but admit the former UFC champion is the greatest of all time, despite his personality.

Jones, 34, has been virtually flawless in his 27-fight career with the man in the mirror truly being his biggest rival in and out of the cage. In Dec. 2009, Jones’ lone career defeat came against Matt Hamill after he landed a pair of illegal 12-6 elbows from the full mount position, resulting in a disqualification. Years later, Jones’ eventual lengthy first title reign came to a screeching halt in April 2015 after he was involved in a hit and run incident with a pregnant woman, forcing the UFC to strip him of his title.

Several other problematic instances followed, but most recently, Jones was entangled in an alleged domestic violence situation with his ex-fiance the morning after his Hall of Fame induction in Sept. 2021.

Despite all the issues and baggage that can come with the former champion, fellow fighters like the UFC’s No. 3-ranked heavyweight contender, Tuivasa still anticipate Jones’ arrival and hope to potentially step in the octagon with him.

“Jones is probably the best MMA fighter of all time,” Tuivasa said on The AllStar’s Fine Dining with Fighters. “Doesn’t matter f****** [if he’s at light heavyweight or higher]. He’s still a dhead. He is what he is, I think he’s the greatest MMA fighter of all time but if you’re a f***** idiot, you’re a f***** idiot. Hitting your missus or whatever, blah, blah, blah. I don’t know the story. Everyone’s got their own things, if you’re an idiot, you’re an idiot. That’s it. But he still is who he is.

“If I ever got the opportunity, I’d fight him. I do this to say like, ‘One day, I’ll fight the champion.’ Well, f***, I fought him. Win or lose, maybe I might win, maybe I might lose, at least I can say I got to have a crack and some guys I’ve beaten, some guys I haven’t. That’s how I kind of live my life. If I ever had a chance, of course, I would.”

Before the surging Tuivasa can worry about any potential Jones matchups, however, things are trending towards Jones either getting an immediate title shot against the champion, Francis Ngannou when healthy, or taking on former titleholder, Stipe Miocic. Meanwhile, Tuivasa looks to extend his five-fight win streak against the recent interim champion Ciryl Gane when the two collide at UFC Paris on Sept. 3.

“If it happens, it’s meant to happen,” Tuivasa said of Jones. “Like I’ve said, I think I’m gonna be around for a little bit. Obviously, he’s got a bit left in him.”