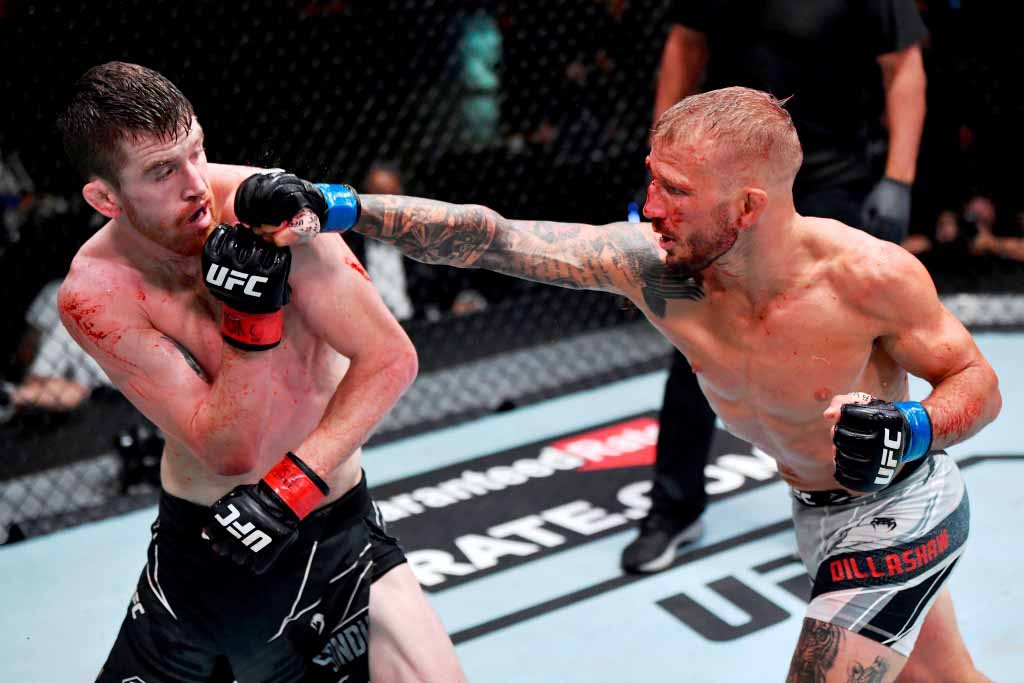 TJ Dillashaw returns to action in the headliner of UFC Vegas 32 event for a bantamweight showdown with Cory Sandhagen.

Dillashaw (16-4 MMA), the UFC’s former bantamweight champion, will be returning to action for the first time since suffering a knockout loss to Henry Cejudo in January of 2019. Shortly after falling short in his bid to capture the promotions flyweight title, it was revealed that ‘Killashaw’ had tested positive for EPO and was handed a two-year suspension.

Round one of the UFC Vegas 32 main event begins and Cory Sandhagen throws a flying knee and then into an inverted triangle choke. TJ Dillashaw is able to break free and avoid the early scare. Dillashaw is on top now and working some ground-and-pound. Sandhagen scrambles back to his feet. TJ maintains a bodylock hold. He lands a good left and continues to press on Sandhagen. He eventually trips Cory back to the ground and retakes top position. Some ground and pound from TJ Dillashaw now. Sandhagen is doing a good job of defending. The horn sounds to end round one.

Round two of the UFC Vegas 32 main event begins and Dillashaw told his corner he “popped” his knee in the opening round. His movement looks very different in the early moments of the second frame. Cory Sandhagen lands a couple of nice punches as Dillashaw attempts to work his way inside. Sandhagen lands a nasty left and TJ now has a bad cut above his eye. Cory with an uppercut and then a left that drops Dillashaw. The former champion bounces back to his feet. The referee calls the doctor in to look at TJ’s cut. The fight is allowed to continue. Dillashaw’s knee looks wrecked. He is attempting to side shift but is struggling immensely to do so. The horn sounds to end round two.

Round three of the UFC Vegas 32 headliner begins and TJ Dillashaw comes out quickly. Cory Sandhagen is looking to connect with some spinning strikes but ‘Killashaw’ easily slips the attempts. Dillashaw lands a pair of hard low kicks. Another spinning attempt from Sandhagen and TJ shoots and secures a big takedown. Some good shots from TJ land before the horn sounds to end round three.

Round four of the UFC Vegas 32 main event begins and TJ Dillashaw comes out aggressive. He lands a big right hand followed by a pair of nasty low kicks. Sandhagen returns fire with some snapping jabs. The fighters clinch. Good body shots now from Cory. His spinning attempts finally pay off with a big shot to end the round.

The fifth and final round of the UFC Vegas 32 headliner begins and TJ Dillashaw lands low kicks to start. Cory Sandhagen answers back with straight punches down the middle. Dillashaw with plenty of head movement, but Sandhagen is being patient with his boxing. TJ is just pouring blood but not backing down an inch. This fight is going to the judges folks. What a war!