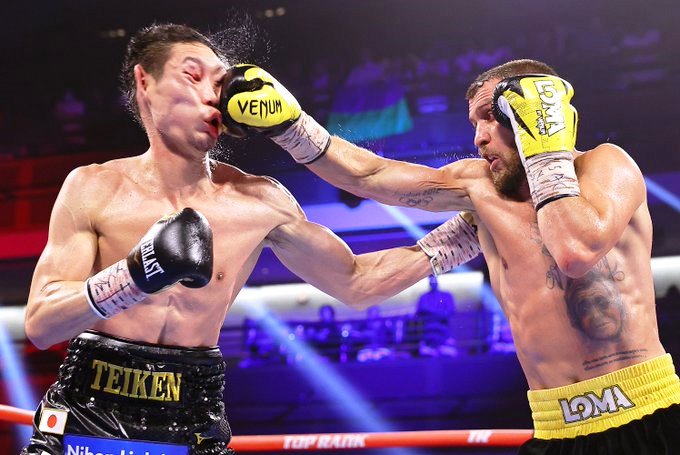 Round 1: Loma comes out to center ring and blocks a Nakatani jab. Nakantani jab but doesn’t land. Nakatani whipping out his long jab early but Loma defending well while trying to find an angle to step in and then does and lands a left hand upstairs. Left hand lands clean for Loma to the head again. Loma slipes a right hand from Nakatani. Loma pressing Nakantani and Nakantani meets him with a right hand. Straight left lead lands clean for Loma. Left hand lands again for Loma after an accidental clash of heads, leaving Loma’s forehead cut. Lots of blood streaming down Loma’s face. Check hook makes partial contact for Loma.

Round 2: Loma has a glob of vaseline on his forehead heading into the round. Loma lands a left hand that knocks Nakatani backwards. Loma lands another left hand and Nakantani holds on and hits the canvas, no knockdown. Straight right makes partial contact to the body for Nakatani. Loma touches Nakatani with two punches on the inside during a clinch. Loma misses on an overhand left but then lands a short right hand with Nakatani on the ropes. Left hand lands as a counter for Loma to the head of Nakatani.

Round 3: Nakatani misses on a jab. Loma probes with his footwork and Nakantani immediately holds once Loma steps inside. Right hook from Nakatani doesn’t land and he takes a hard left from Loma for his trouble. Double jab, double left lands for Loma before he tries to follow it up with even more punches. Nakatani gets warned for a punch straying low. Hard left hand lead lands clean to the face of Nakatani. Loma getting into his punching range at will with his footwork. Counter right lands for Loma, then a double left that puts Nakatani down but it’s ruled a slip!

Round 4: Nakatani landing only 10% of his punches according to punch stats. Jab from Nakatani gets blocked. Jab lands and Nakatani lands a good counter right. Loma pivots around on Nakatani but doesn’t let any punches go to capitalize. Right hand lands clean for Loma, who then spins Nakatani to the ropes. Right hand from Nakatani misses upstairs. Loma lands a jab and a straight left to the body. Jab lands again for Loma and Nakatani continues to grab hold as often as he can. Left lands clean to the head of Nakatani. Jab lands for Loma as Nakatani steps forward.

Round 5: Loma continues to bewilder Nakatani with his footwork. Nakatani misses on a right hand and gets tangled up with Lomachenko. Nakatani continues to hold on the inside. Left hand lands for Loma as he steps to his right.Hard shot lands for Loma once again. Loma even punching in the clinch, physically imposing himself on the bigger man. Barrage of punches from Loma puts Nakatani down!

Round 6: Right hand from Nakatani lands on Loma’s guard. Loma lands a right jab and left to the body. Right hand from Nakatani grazes Loma. LOMA HURTS NAKATANI AND BATTERS HIM IN THE CORNER! HARD LEFT LANDS UPSTAIRS FOR LOMA! Nakatani digging deep and trying his best to survive but Loma lands another left hand to the head, then a right hand! Nakatani needs to slow the pace of the abuse he’s taking. Nakatani is bleeding from his face now, but these are from punches.

Round 7: Loma probing with his footwork and steps to the side and pastes Nakatani’s face with a straight left hand. Left hand lands twice for Loma. Loma takes another angle on Nakatani but doesn’t throw anything off of it. Now Loma lands a left hand to the body after two right hands. Left hand lead lands clean for Loma. Another left hand lands for Loma and Nakatani immediately grabs hold. Several left hands land on Nakantani’s eye and it’s nearly swollen shut!

Round 8: Nakatani’s right eye is in bad shape. Nakatani gets warned again for low blows. Straight left hand lands clean to the face of Nakatani. Right hand from Nakatani doesn’t land clean. Jab and left to the body comes from Loma and Nakatani holds on. Quick flurry comes from Loma on the inside. Loma comes forward behind some punches and has Nakatani retreating.

Round 9: Nakatani comes out throwing jabs that don’t land but then gets tied up with Loma but Loma nails him with a couple left hands in the clinch, Nakatani doesn’t like it. Right hook lands clean for Loma this time, then a left hand that staggers Naktani. Loma tries to finish him off! Left hook lands for Loma and Nakatani is holding on for dear life! Straight left lands to the body, then a right hook to the head, then another and Nakantani collapses! 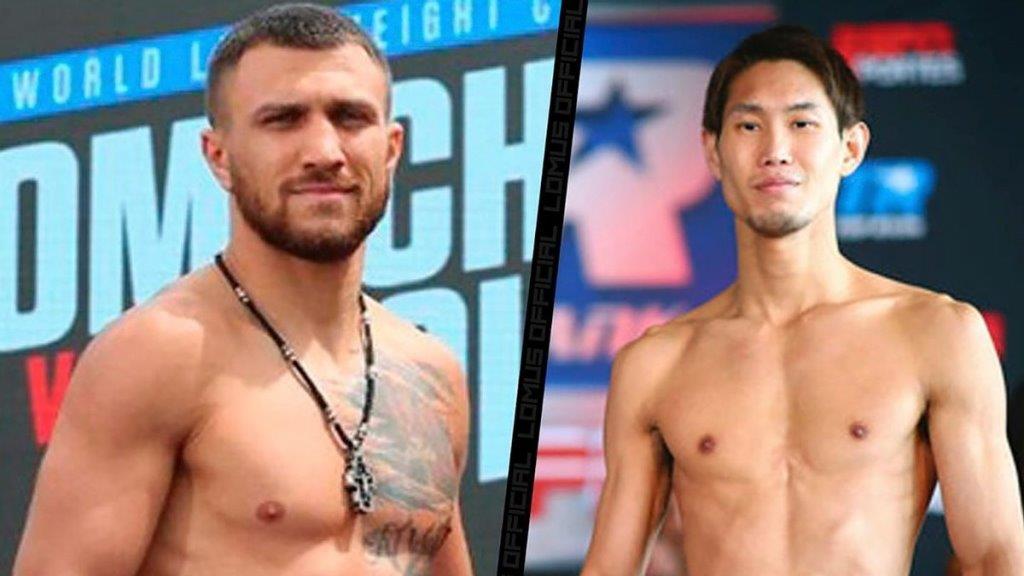 Vasiliy Lomachenko arrives at Virgin Hotels in Las Vegas, where his fight with Masayoshi Nakatani will take place