What did Colby Covington say about Jorge Masvidal’s family? 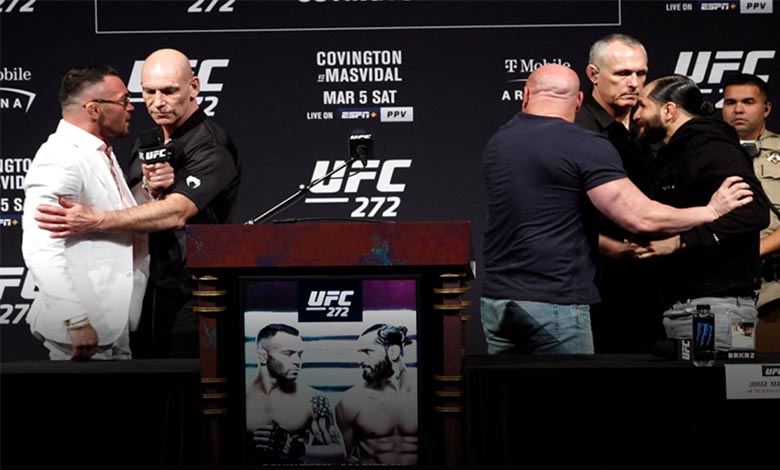 Colby Covington has repeatedly slammed Jorge Masvidal in the media, calling him a bad husband who owes alimony and child support payments and a bad father who lies to his children.

At the UFC 272 press conference, Covington even called ‘Gamebred’ a “deadbeat dad.”

The infamous rivalry between roommates-turned-enemies goes way beyond the UFC. Both top welterweight contenders have insulted one another on several occasions, but ‘Gamebred’ insisted that ‘Chaos’ went overboard when he mentioned his kids and family.

In the wake of the pair’s altercation at a restaurant in Miami, TMZ reported that cops said Covington heard Masvidal yell, “You shouldn’t have been talking about my kids” before the assault.

Covington mentioning Masvidal’s family is not a recent development or an isolated incident. In an interview with The Mac Life ahead of UFC 261, it can be recalled that ‘Chaos’ said:

“He [Masvidal] just started talking out of nowhere. Started saying that he wanted to fight for his kids and he’d fight anybody for his kids, but come to find out the guy’s a piece of sh*t. He doesn’t care about his kids. I was just with his ex-wife yesterday… If you go look at the Internet, we know that Google is complete fake news… it says Jorge Masvidal’s wife is Iman Kawa and the mother of his children is Iman Kawa.”

“Iman Kawa, Malki Kawa, and Ibrahim Kawa; the First Round Management’s sister? You’re whring out your sister on Google and putting her as Jorge Masvidal’s wife and the mother of his children? That’s a complete lie. The mother of his children and his wife that is still in his marriage certificate today, they’re not divorced yet, is Maritza Collado, Maritza Masvidal. So, the truth is Jorge Masvidal is a piece of sh*t father, he’s a piece of sh*t fighter and I hope I get to expose him in front of the whole world soon.”

Jorge Masvidal famously started as a bare-knuckle fighter in backyard brawls in Miami. Suffice it to say that ‘Gamebred’ believes in the rules of the streets where the codes of an octagon don’t apply.

According to former UFC champ-champ Daniel Cormier, Covington, on the other hand, is not honed in the streets. For ‘DC,’ someone should’ve been responsible for ensuring ‘Chaos’ wouldn’t cross the line for his own safety.

In a recent episode of ESPN’s DC & RC, he explained:

“Colby Covington is not a street guy. Like, I will tell you today, Colby Covington is not a street guy. Colby Covington is a guy that likes to talk and fight. The shtick may have crossed the line and now it’s gotten him into a situation that he is not really equipped for. That is why he didn’t have anybody in place with him to make sure that it didn’t cross a line. But because I know who I am, I always made sure somebody was in that place with me to make sure that I didn’t cross the line, to ensure my safety and protect everything that I was building.”