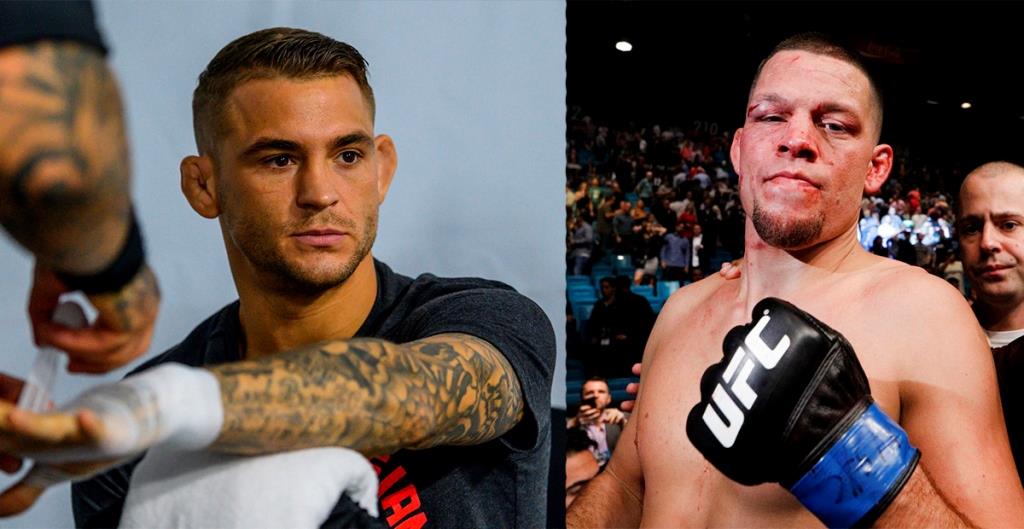 Dustin Poirier has stated that he is still anticipating a fight with Nate Diaz to come to fruition. A potential bout between the two southpaws has been in the works for quite some time now.

“Waiting on the call”

Nate Diaz and Dustin Poirier were originally scheduled to square off at UFC 230 in 2018. However, an injury to ‘The Diamond’ derailed the fight.

Over three years later, it appears as though we could finally see the duo lock horns inside the octagon. They have been going back-and-forth on social media in recent weeks, with both fighters expressing an interest in taking on one another.

Both Diaz and Poirier are coming off losses.

Diaz suffered a unanimous decision loss to British welterweight Leon Edwards at UFC 263 last year. Poirier’s most recent octagon outing came in a lightweight championship bout against Charles Oliveira at UFC 269, where ‘The Diamond’ was submitted in the third round.

Nate Diaz recently revealed that he had spoken to the UFC brass about a potential bout with Poirier. Diaz claimed the promotion wasn’t keen on booking the fight. He also took a dig at Poirier, saying he “s**ks.”

“I just talked to the ufc I said wassup with the Dustin Poirier fight I wanna fight asap but they said dustin sucks and they don’t want it sorry Dustin you suck hope to fight asap tho let’s do this Olivera you s**k too.”

Diaz has just one fight remaining on his current contract with the UFC. He is yet to reach an agreement with the promotion as far as an extension is concerned. Poirier, on the other hand, is looking to bounce back and return to winning ways as soon as possible.

UFC president Dana White recently shared that he is willing to book a fight between the two UFC stars.

During the UFC Vegas 45 post-fight press conference, White claimed that if Poirier and Diaz showcase a mutual interest in fighting one another, the UFC will go ahead and book it.

It remains to be seen if the fight will materialize or not.