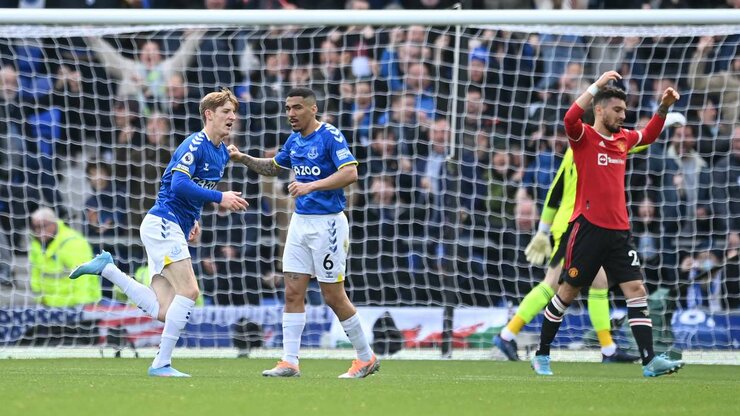 Everton kings of the impossible with flash of Gordon magic

Everton boosted their survival hopes with a 1-0 victory over Manchester United at Goodison Park – only their second win in 14 Premier League (PL) attempts against United, heaping the pressure back onto Burnley and Watford.

Frank Lampard would undoubtedly have expected a response from his Everton side after their disastrous 3-2 defeat against relegation rivals Burnley in midweek.

However, it was United who started on the front foot and Everton had Jordan Pickford to thank for the scores remaining level after just ten minutes as he produced an excellent stop to deny Marcus Rashford.

It was Rashford who was proving to be the thorn in Everton’s side, but his failures in front of goal were punished by the ‘Toffees’, who took the lead when Anthony Gordon’s shot deflected in off who else but Harry Maguire to give Everton a HT lead.

United were just as devoid of ideas after the break – crosses into the box and long hopeful balls in behind the Everton back line were about all the ‘Red Devils’ had up their sleeve, with the ‘Toffees’ wise to it.

Everton were probably the side who came closer to finding that elusive second goal, but themselves struggled to carve out any clear-cut chances despite their almost incessant pressure at times.

United were struggling to get to grips with Gordon down the Everton right, and as the youngster wriggled free on the byline it seemed for all the world as though he would cut-back for Dominic Calvert-Lewin to tap into an empty net, but Maguire just about spared United’s blushes.

It’s a monumental three points for Everton, who established that four-point gap between themselves and the relegation zone, though Watford and Burnley both have opportunities to cut that gap later this weekend.

As for United, their top-four race is now probably run after one win in their last five PL matches – with Arsenal’s games in hand and their hit-and-miss form, it’s hard to see Ralf Rangnick’s side closing the gap, though the potential impending arrival of Erik ten Hag does at least provide some hope for next season.