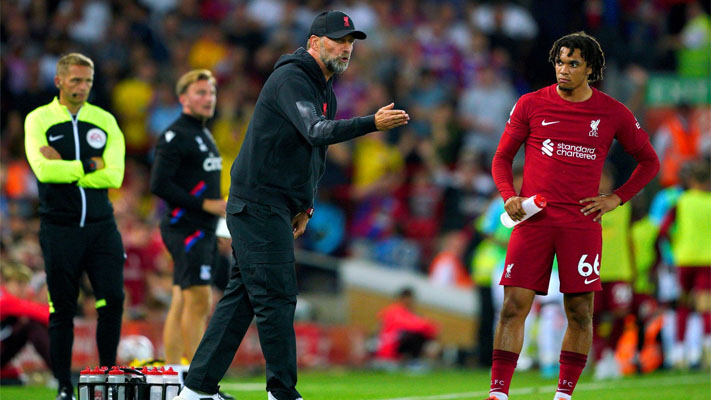 Football agent Rob Segal has urged Liverpool to drop Trent Alexander-Arnold as he believes the English right-back needs some rest.

The Merseyside outfit are currently going through an injury crisis with the likes of Ibrahima Konate and Jordan Henderson on the sidelines. According to Segal, Arnold could potentially join his injured teammates unless he receives ample rest.

In an interview with Caught Offside, Segal said:

“Liverpool have major injury problems which haven’t helped and a player like Trent Alexander-Arnold probably needs a prolonged rest.”

The agent also believes that the 23-year-old talent is arrogant in knowing that manager Jurgen Klopp will consistently select him in the starting XI.

The Englishman was easily beaten on the flank by Khvicha Kvaratskhelia, who assisted Napoli’s third strike of the game.

“However, because of his standing within the club, you can feel his arrogance when he is slowly running back to goal. Alexander-Arnold knows that no matter what he does, right or wrong, he is likely to start week in, week out.”

“It is no secret that Alexander-Arnold is a lot better going forward than he is defensively, so his weaknesses need to be covered and unfortunately for Klopp, at the moment, none of his side’s backline are playing particularly well. The timing of their drop-off in form has been really unfortunate.”

Liverpool have been poor this season, winning just two out of seven matches in all competitions so far. They are seventh in the Premier League and have kept just two clean sheets.

Jurgen Klopp’s men started their 2022-23 Champions League campaign with a 4-1 defeat against Napoli. Piotr Zielinski (2), Andre-Frank Zambo Anguissa, and Giovanni Simeone added their names to the scoresheet for the hosts.

The Merseyside outfit had only one goal to show for in an underwhelming performance after Luis Diaz found the back of the net in the 49th minute.

In a critical assessment of the Reds’ performance, Ferdinand proclaimed (via The Mirror):

“It was an embarrassing first 45 minutes for Liverpool, particularly defensively. What you can’t accept as a manager or as a player is a lack of effort and desire. When people don’t run or don’t have the desire to get back.”

“Gomez makes the mistake but you’ve got to get back and help your team-mates and Trent didn’t do that. Liverpool got teased, they got embarrassed, they got shown up. This result has been coming too. They were lacklustre and lacked grit, determination and desire.”

The Reds will next face Wolverhampton Wanderers in the Premier League. 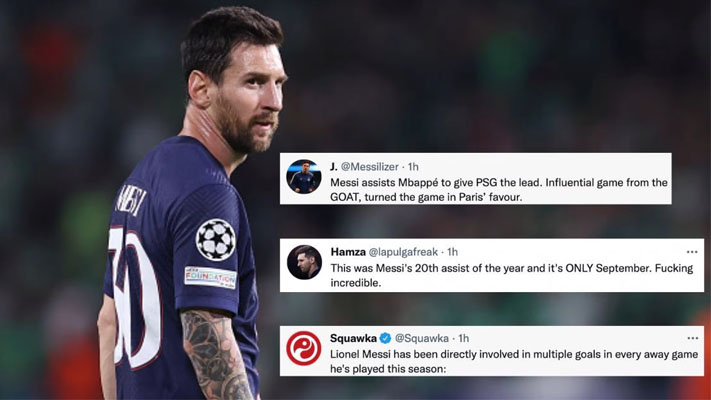 Fans were in awe of yet another majestic Lionel Messi performance for Paris Saint-Germain (PSG) this season. He was exceptional in their 3-1 win over Maccabi Haifa in the UEFA Champions League on Wednesday, September 14, at the Sammy Ofer Stadium. The Argentine scored one goal and assisted another as the Parisians secured their second… 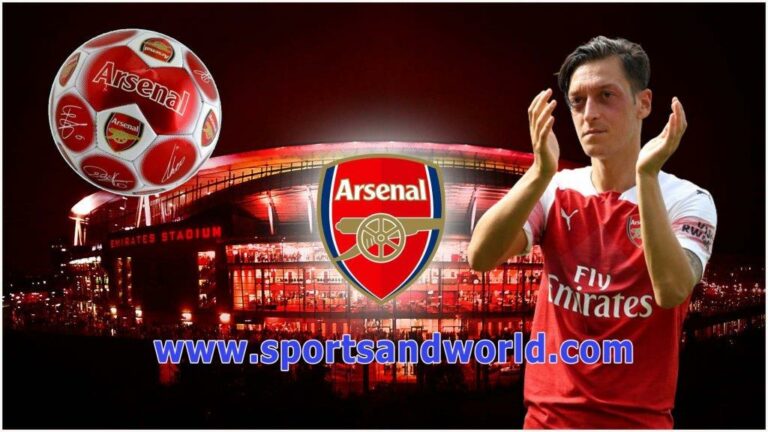 [vc_row][vc_column][vc_raw_html]JTNDc2NyaXB0JTIwYXN5bmMlMjBzcmMlM0QlMjJodHRwcyUzQSUyRiUyRnBhZ2VhZDIuZ29vZ2xlc3luZGljYXRpb24uY29tJTJGcGFnZWFkJTJGanMlMkZhZHNieWdvb2dsZS5qcyUyMiUzRSUzQyUyRnNjcmlwdCUzRSUwQSUzQyUyMS0tJTIwNzI4LTkwJTIwLS0lM0UlMEElM0NpbnMlMjBjbGFzcyUzRCUyMmFkc2J5Z29vZ2xlJTIyJTBBJTIwJTIwJTIwJTIwJTIwc3R5bGUlM0QlMjJkaXNwbGF5JTNBaW5saW5lLWJsb2NrJTNCd2lkdGglM0E3MjhweCUzQmhlaWdodCUzQTkwcHglMjIlMEElMjAlMjAlMjAlMjAlMjBkYXRhLWFkLWNsaWVudCUzRCUyMmNhLXB1Yi01MTEzODI2ODg1MDg4NTM4JTIyJTBBJTIwJTIwJTIwJTIwJTIwZGF0YS1hZC1zbG90JTNEJTIyODA4NTUyMzAxMiUyMiUzRSUzQyUyRmlucyUzRSUwQSUzQ3NjcmlwdCUzRSUwQSUyMCUyMCUyMCUyMCUyMCUyOGFkc2J5Z29vZ2xlJTIwJTNEJTIwd2luZG93LmFkc2J5Z29vZ2xlJTIwJTdDJTdDJTIwJTVCJTVEJTI5LnB1c2glMjglN0IlN0QlMjklM0IlMEElM0MlMkZzY3JpcHQlM0U=[/vc_raw_html][vc_column_text] Mesut Ozil does not intend to leave Arsenal: I will decide when to leave, not other people The German midfielder wants to work out his contract with Arsenal until the end. Arsenal midfielder Mesut Ozil finally lost his spot on his squad when Mikel Arteta took over as head coach in December 2019. There… 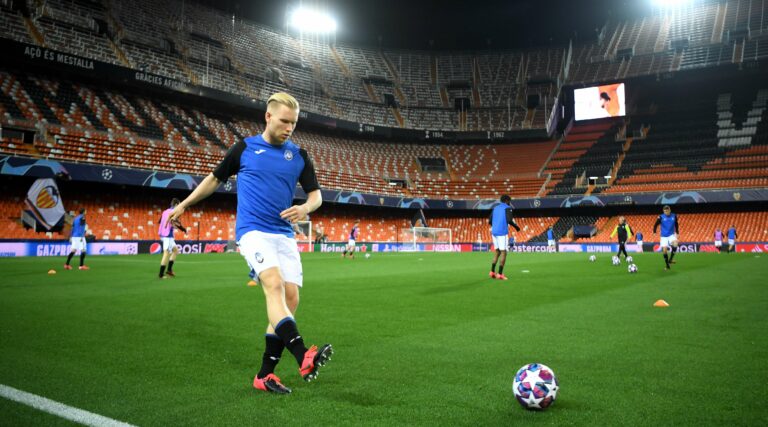 [vc_row][vc_column][vc_separator color=”green” border_width=”10″][vc_column_text] Greetings to all football fans. Thank you for visiting the site www.sportsandworld.com. On March 10, 2020, the match between the two teams in the Champions League 1/8 finals. “Valencia” Spain meets in their field team “Atalanta” Italy. This second game in the tournament, the first “Atalanta” won with a good score of… 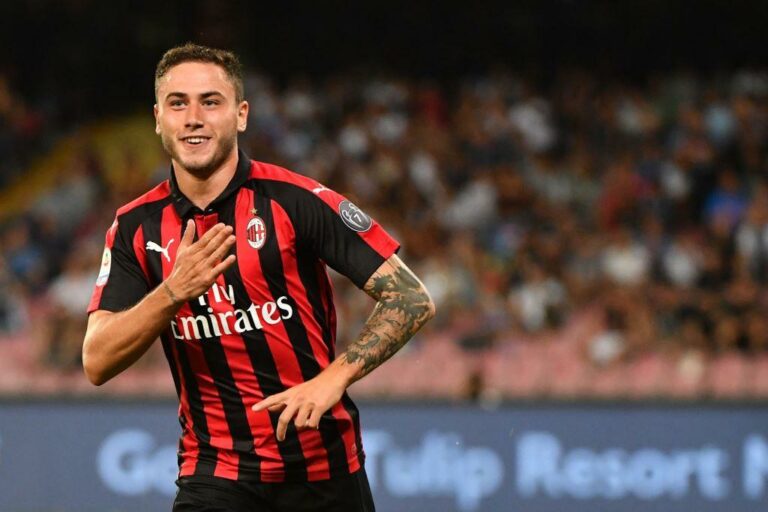 [vc_row][vc_column][vc_column_text] Milan is close to signing a new contract with Davide Calabria. The Italian fullback is expected to extend the agreement with the Rossoneri until the summer of 2024.   Wing back Davide Calabria may soon sign a new contract with Milan. Reported by Calciomercato.   According to the source, Milan are close to agreeing… 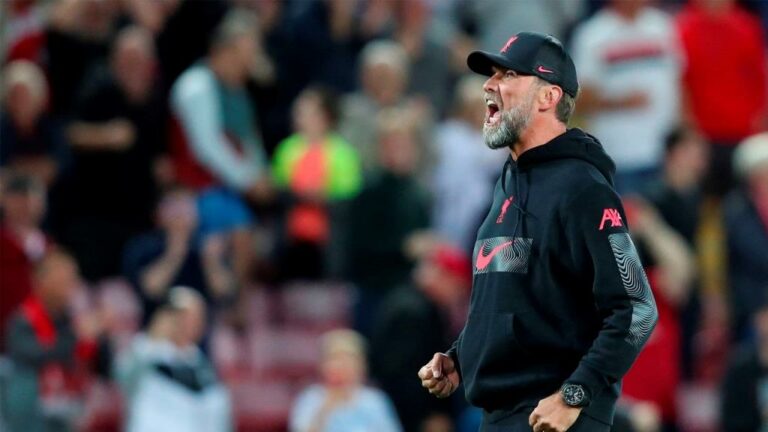 Liverpool manager Jurgen Klopp has hailed Harvey Elliott for his performance against Newcastle United, naming the youngster his Man of the Match. The Reds welcomed Newcastle to Anfield for their Premier League matchday six clash on Wednesday night (August 31). The visitors drew first blood through new signing Alexander Isak in the 38th minute, and… 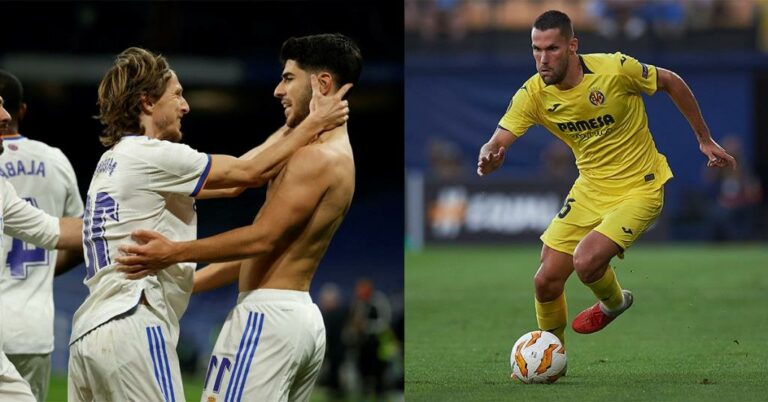 Villarreal – Real Madrid PREVIEW 12.02.2022 | SPAIN: LALIGA – ROUND 24 Villarreal bounced back from their 1-0 defeat to Elche (Jan 16) with two consecutive La Liga (LL) wins ‘to nil’ to keep themselves in contention for European qualification. They laid down a significant marker with a 2-0 victory over fellow top-four contenders Real…