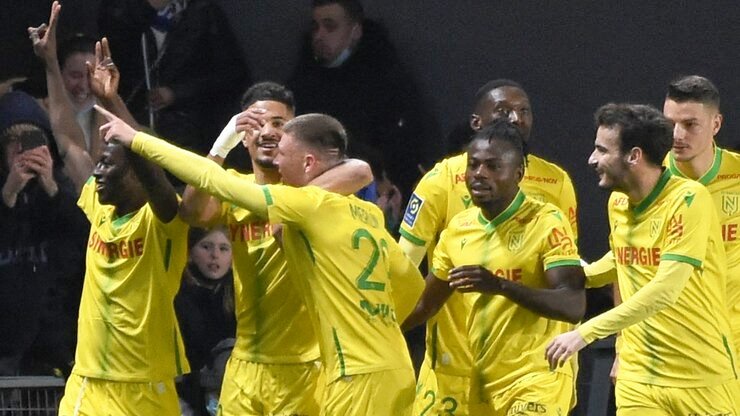 Nantes won a fifth successive home game in all competitions and ended Paris Saint Germain’s 15-match unbeaten run in Ligue 1 with a stunning 3-1 victory at the Stade de la Beaujoire.

Randal Kolo Muani put the hosts in front as early as the fourth minute with the deftest of finishes, after being expertly picked out by Moses Simon at the end of a superb free-flowing Nantes move.

‘Canaries’ needed keeper Alban Lafont at his best to keep PSG’s star-studded attack at bay, and he did brilliantly to deny Lionel Messi a goal on his 800th appearance in club competitions in a one-on-one chance.

Neither Messi nor PSG knew what had hit them when Quentin Merlin showed some individual magic to make it 2-0 in the 17th minute, with an exquisite effort off the outside of his foot – the 19-year-old’s first Ligue 1 goal.

Lafont was doing all he could to preserve his clean sheet, with fine saves to thwart Kylian Mbappé and Idrissa Gueye, while Neymar should have done better with a strike that he fired straight at the ‘Canaries’ shot-stopper.

Just as things appeared to be going smoothly for Nantes, Dennis Appiah was harshly shown a straight red card for bringing down Mbappé and supposedly denying a clear goalscoring opportunity. Fortunately, sanity prevailed and the defender saw his red card downgraded to a yellow.

Then, this incredible game took another twist when Georginio Wijnaldum was penalised for a handball in the box after a VAR review, and Ludovic Blas blasted home the penalty to put Antoine Kombouaré’s side 3-0 up at the interval.

Mauricio Pochettino’s team needed an early goal in the second half, and got exactly that through Neymar – the Brazilian got PSG off the mark in the contest as he latched onto Messi’s excellent defence-splitting pass and fired past Lafont within two minutes of the restart.

Momentum appeared to be shifting in the ‘Parisians’ favour when they were awarded a penalty following Appiah’s mistimed challenge on Mbappé in the box, but Neymar’s abysmal spot-kick went straight into Lafont’s hands.

The result means PSG failed to extend their 13-point advantage at the top of Ligue 1, while Nantes moved up five places in the table to fifth on a memorable night in north-western France.