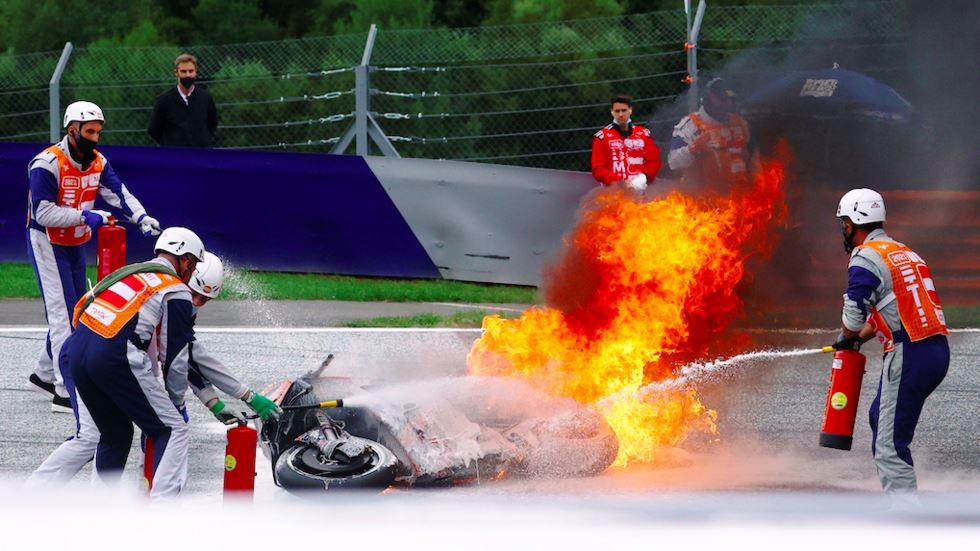 MotoGP: Lorenzo Savadori rider from Italia was involved in a crash with fellow racer Dani Pedrosa during the Michelin Grand Prix of Styria in an accident which triggered an intense inferno on the track.

Dani Pedrosa from Spain, who was making his first MotoGP appearance since 2018, fell at the third turn of the Red Bull Ring on lap three before he was struck by Savadori on Sunday, with the collision rupturing a fuel tank and leading to a fireball erupting on the track.

Pedrosa was fortunate enough to be able to walk away from the accident but Savadori – who initially rose to his feet after the smash – appeared to be in worse shape and was subsequently removed from the track on a stretcher.

Not surprising, Savadori wasn’t deemed fit to continue when the race was restarted after the red flag was flown, and was later diagnosed with a broken ankle after he was attended to by medics. Pedrosa, meanwhile, continued the race on a replacement bike and later finished in 10th position.

“Fortunately, everything [is] OK,” wrote Savadori on Instagram in the hours after the smash. “See you soon.”

The accident, which thankfully doesn’t appear to have led to significant injury, comes just weeks after teenage racing star Hugo Millan was killed after an accident at the Motorland Aragon track in Spain.

The Moto3 prodigy, who was just 14 years old, died while competing in the European Talent Cup after he came off his bike and was accidentally hit by Milan Leon Pawelec.

On that occasion, medics attempted to provide life-saving treatment on the track but he passed away shortly after arriving at Zaragoza Hospital.

The sport has mercifully avoided another tragedy in the case of Savadori, whose accident brought back grim memories of an incident involving Formula 1 driver Romain Grosjean last November in which he became trapped inside his car for a period of around 30 seconds while it became engulfed in flames after an accident.

He survived but suffered significant burn injuries, primarily to his hands.