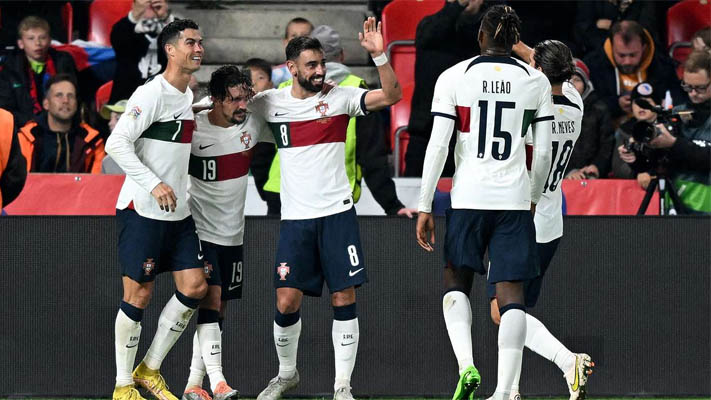 Despite entering the contest off the back of consecutive defeats, the Czech Republic started the encounter with great intent. Václav Jemelka and Patrik Schick both had early sights of goal, but their wayward efforts failed to trouble Diogo Costa.

Although Portugal were dominating possession, they were fortunate not to fall behind just after the half-hour mark when Antonín Barák powered his headed opportunity over the bar.

The Fiorentina man was quickly punished for his misguided effort, as the visitors demonstrated their quality to take the lead through an unlikely source. Rafael Leão’s neat cut-back found Diogo Dalot, who was in the right place at the right time to sweep home his first international goal.

An intriguing first half ended with incredible drama, as Portugal doubled their lead through Bruno Fernandes, who was the beneficiary of an immaculate low cross from Mário Rui.

However, the hosts looked set to halve the deficit when Cristiano Ronaldo’s handball presented Patrik Schick with the chance to level from the spot. With the home support spurring him on, Schick was unable to keep his cool, firing his penalty over Costa’s crossbar.

Still reeling from Schick’s penalty miss, the Czech Republic knew they had to score the first goal after the restart if they were to mount a fightback.

Unfortunately for the hosts, Dalot had other ideas, as he wasted no time in doubling his international tally. The Manchester United full-back superbly chopped the ball onto his left foot before curling a long-range effort beyond the despairing Tomáš Vaclík.

Dalot’s brace ended the match as a contest, although Diogo Jota added gloss to the scoreline with a late close-range header. Following a commanding display, Portugal will quickly turn their attention towards a winner-takes-all clash against Spain on Tuesday. Meanwhile, the Czech Republic will need to beat Switzerland to avoid relegation from League A.

All goals Czech Republic vs Portugal:

Goal! Rafael Leao shows great vision to find Diogo Dalot (Portugal) with a cheeky pass inside the box, and his first-time shot is precise and sails low into the middle of the goal. 0:1.

Goal! Mario Rui produces a great pass that finds Bruno Fernandes (Portugal) inside the penalty area, who takes advantage of the situation to rifle a shot into the right side of the goal. 0:2.

The defending players give Diogo Dalot (Portugal) far too much free space and he knows how to take advantage of it. He produces a howitzer in the direction of the bottom left corner. Tomas Vaclik was taken unawares by his effort and the score is 0:3.

Goal! Cristiano Ronaldo gets up really well from the corner and heads the ball into the six-yard box where Diogo Jota (Portugal) glances a header into the net. 0:4.