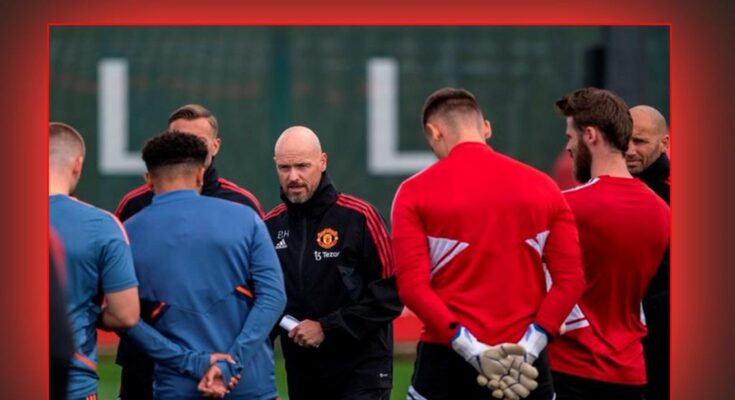 Ten Hag, who arrived at United’s Carrington training complex at 8am for his first day on Monday morning, had to draft in a surfeit of under-21 players to offset the absence of several senior internationals.

Ten of the 28 squad members were players who had returned from loan spells, among them Donny van de Beek and Anthony Martial.

Van de Beek was the only senior midfielder available to Ten Hag, who rounded out his midfield options with Charlie Savage, Zidane Iqbal, Ethan Galbraith and Charlie Wellens. Savage, Iqbal and Galbraith have each made one substitute appearance for the United first-team.

Eighteen of the players emerged from the United academy, with the 17-year-old Alejandro Garnacho the youngest squad member. Garnacho, who turns 18 on Friday, returned to pre-season early as he attempts to earn a place in Ten Hag’s pre-season tour squad.

Garnacho and Alvaro Fernandez, 19, appear to have received new squad numbers, having ended last season in the first-team squad. Garnacho made his debut against Chelsea in April and Fernandez was an unused substitute on four occasions.

Dean Henderson was absent as he prepares to complete a season-long loan move to Nottingham Forest. The 25-year-old has provisionally agreed to the move and will have to undergo a medical.

New Manchester United manager Erik ten Hag is known for laying down the law on his first day at a new club, as his previous employers Go Ahead Eagles discovered

Erik ten Hag is not afraid to deliver a dressing down when it’s necessary – and Manchester United’s players should take note now they’re training under the 52-year-old.

Dutchman Ten Hag was announced as the Red Devils’ next boss back in April, while Ralf Rangnick was still at the helm. He took his very first training session on Monday to assess his squad ahead of the new season.

Ten Hag is known for being highly organised. He’s also a man that considers minute details – something that impressed the Red Devils’ hierarchy when they made the decision to appoint him over Mauricio Pochettino and co.

And a dressing down to players at former club Go Ahead Eagles should serve as a warning to United’s stars. According to the Manchester Evening News, the Dutch side’s players dumped their bibs in one big pile as they left the training ground following their first session under him.

Ten Hag wanted the bibs, which were coloured blue, yellow and orange, to be left in organised piles, and let the players know he was unhappy with them simply discarding the shirts without much thought for who would have to pick them up and sort them out.

As aforementioned, Ten Hag considers minute details to be of utmost importance, and the United players are likely going to be pulled up on other minor issues until they get to grips with the Dutchman’s way of doing things.

Bart Vriends was a part of Ten Hag’s set-up at Go Ahead Eagles, and he previously explained that the Dutchman started making changes on his very first day in charge.

“What really came out from those conversations with everyone involved was that Erik ten Hag changed the professionalism at the club in just a couple of weeks at the start of pre-season,” he told Sky Sports.

“This was a small mid-table second division club in a small city in the east.

Ten Hag is keen to make the most of the transfer window this summer before his first season in charge gets underway, and he has already identified a handful of targets he believes would make his life more manageable.

Among them are Frenkie de Jong and Anthony, two players he worked with at Ajax.