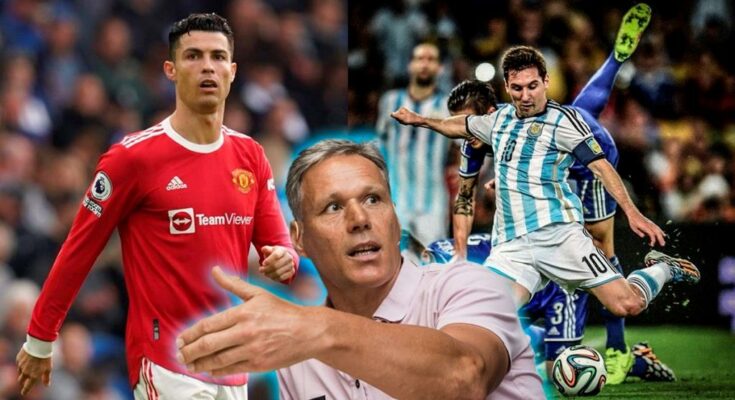 Former Holland manager Marco van Basten has picked Lionel Messi over Cristiano Ronaldo while giving his opinion on the never-ending debate on who is the better player.

The former Ajax and AC Milan player Marco van Basten also added that those who picked Ronaldo ahead of Messi ‘know nothing about football, or they are saying it in bad faith’.

However, the three-time Ballon d’Or winner added that despite being a truly gifted player who went on to achieve so much in the football world, Messi is not even one of the top three players of all time. Marco van Basten believes Pele, Diego Maradona, and Johan Cryuff are his three best players of all time.

Cristiano Ronaldo and Lionel Messi have been the dominant figures in world football for more than a decade now, achieving almost everything in their glorious career. The Argentine international has won seven Ballon d’Or awards, while Cristiano Ronaldo has won five.

Lionel Messi completed the move from his parent club Barcelona to Paris Saint-Germain ahead of the 2021-22 season, while Cristiano Ronaldo made a dream Manchester United return before the start of last season.

The 37-year-old Portuguese was the second highest scorer in the recently concluded Premier League despite the Red Devils having a horrendous season by their standards. He was also included in the PFA Premier League team of the season for his goal-scoring exploits in a tumultuous time for the club.

However, Lionel Messi had a rather subdued first season in Ligue 1, but won his first major international trophy as Argentina lifted the Copa America title, defeating Brazil in the final.

“Cristiano is a great player, but those who say he is better than Messi know nothing about football, or they are saying it in bad faith.”

“Messi is one of a kind. Impossible to imitate and impossible to repeat. A player like him comes along every 50 or 100 years. As a kid, he fell into the football genius pot.”