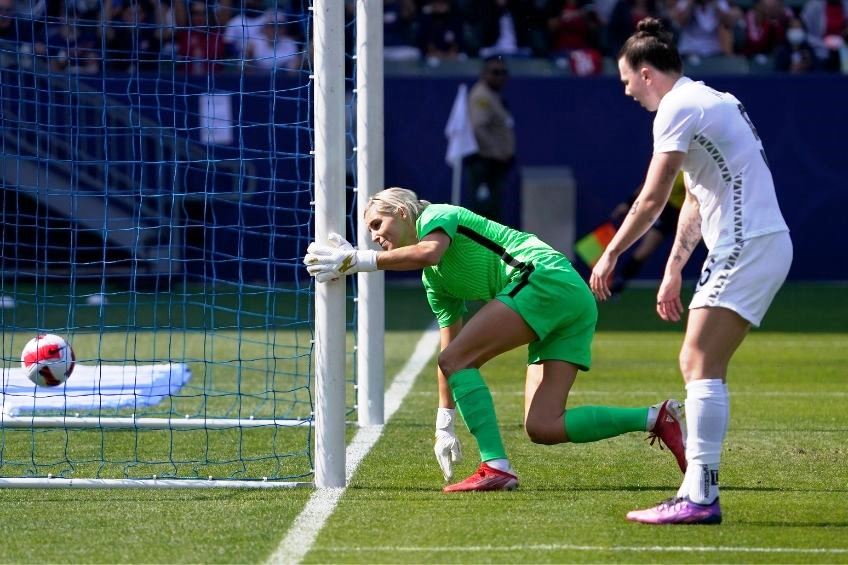 A Liverpool and New Zealand women’s footballer bagged the perfect hat trick of own goals while on international duty at the weekend and received support online amid mockery and abuse.

Meikayla Moore’s nightmare began just five minutes into a SheBelieves Cup clash with the USA in Los Angeles on Sunday when she put the Americans 1-0 up by converting a Sophia Smith cross past her own goalkeeper Erin Nayler with her right foot.

Just a minute later, another pinpoint delivery – this time from Sofia Huerta – came off Margarey Purce’s head and then Moore’s too and led to the world champions doubling their lead.

With nine minutes still to spare in the first half, Meikayla Moore completed her perfect hat trick by slicing Purce’s low-driven cross beyond Nayler with her left foot, and was put out of her misery by manager Jitka Klimkova who replaced Moore with Rebekah Stott before the interval.

Moore’s “absolutely brutal” 50th cap was one to remember for all the wrong reasons. She was widely-mocked online, with social media accounts and users remarking that it was “absolutely not her day” and that she had a “nightmare”.

“Imagine what she could have achieved if she was given the full 90 minutes,” quipped one joker.

“Born on a farm in Ohio in 2000 she was quickly shipped to New Zealand and secretly trained by soccer-mad CIA special agents in the ways of the Kiwis and unleashed for a devastating purpose…,” wrote another.

But Meikayla Moore did receive support from a former teammate of those on the other side of the ball at halftime, before the Americans went on to seal a 5-0 win overall with further efforts from Ashley Hatch and Mallory Pugh.

“This beautiful game can be cruel sometimes and today doesn’t define her! I can’t imagine the pressure she feels at the moment and I hope she’s okay.”

A number of parties predicted that Meikayla Moore would “bounce back”. “Playing for your country is the greatest honour, but sometimes the game can be cruel,” pointed out a British women’s football commentator.

“This won’t define her, and let’s not forget the opposition. Pleased we have her and a host of top players and people in the FA Women’s Championship.”

Back in the States, another Englishman in NJ/NY Gotham women’s team coach Scott Parkinson highlighted that Meikayla Moore was “playing against the best team on the planet, who are delivering unreal balls into the box”.

“For all the keyboard warriors giving her a bit of sh**, get back in your mum’s basement,” Parkinson demanded. “She’s doing things that 99.9% could only dream about! Good player!”

New Zealand’s humbling defeat left them bottom of the SheBelieve’s table with zero points from two defeats and a minus six goal difference.

Next up for them is a Wednesday meeting with fellow strugglers the Czech Republic, who have managed just a single point by drawing 0-0 with the US, in what will be their last game in the competition.

The US still have business to take care of, however, and can overtake leaders Iceland by beating them on the same evening to deliver the trophy for a fifth time.