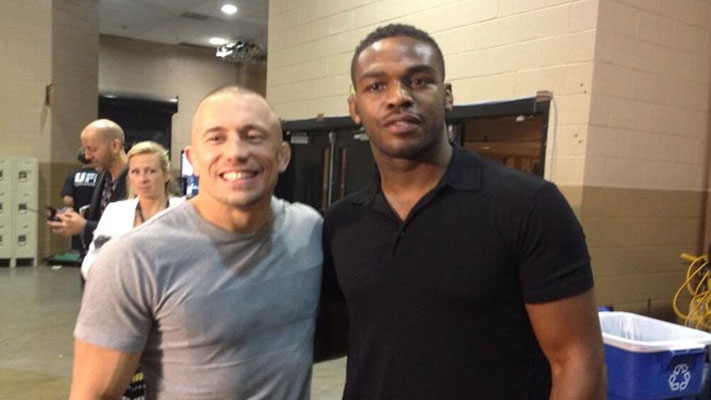 Georges St-Pierre likes what he sees of the new Jon Jones.

At a recent UFC fan Q&A, St-Pierre was asked how he successful Jones can be at heavyweight. Jones is the UFC’s most decorated champion at 205 pounds, with three championship reigns to his name (including an interim title win in 2016), and he awaits his first booking in his new weight class after preparing for the change for the better part of the past two years.

St-Pierre believes that Jones’ skills will translate to another impressive run in the UFC’s biggest division.

“Jon Jones is known to be the best in the sport, but he never fought at heavyweight,” St-Pierre said.

“It will be interesting how he will adapt to heavyweight. I’m confident that, after a long layoff, Jon Jones has all the skills to come back like he was when he had his reign at light heavyweight. I just don’t know how it’s going to play out.

“It’s one of these things that sometimes time can change the data, but there’s so many X factors that we don’t know. I’m very excited, it’s a great time to be a UFC fan, especially when I look at what is going on in the heavyweight division.”

St-Pierre has personal familiarity with Jones from their brief time together as star fighters under the tutelage of Greg Jackson. While St-Pierre reigned as the UFC’s welterweight king, Jones eventually became the youngest champion in UFC history and successfully went on to defend the light heavyweight title 11 times in total.

It has been a while since St-Pierre has seen Jones in person, but based on what he saw the last time they met up, he likes Jones’ chances against current heavyweight champion Francis Ngannou and former champion Stipe Miocic.

“When I met Jon Jones the last time, it was a year ago and he put on a lot of weight,” St-Pierre said.

“He seemed very comfortable at that weight, so it led me to believe that he’s going to come back as good as he was in the light heavyweight division, except with more mass, more muscle mass. So I don’t know. As a fan, I want to see him like he was at light heavyweight and perhaps even better than he was, but he has great challenges ahead.

“He’s going to take on Stipe Miocic and then he’s got Francis next if everything goes according to plan for him. I don’t know how it’s going to play out, but I think as a UFC fan it’s going to be a very entertaining fight.”