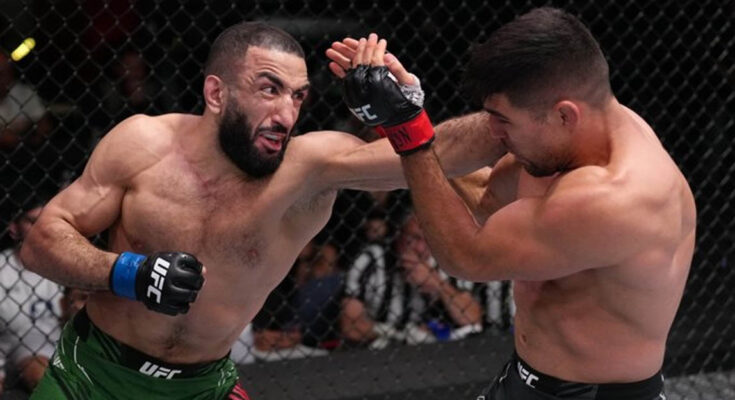 UFC Vegas 51 event was headlined by a welterweight rematch between Vicente Luque and Belal Muhammad.

Luque (21-8-1 MMA) and Muhammad (21-3 MMA) had originally collided way back at UFC 205 in November of 2016. That night it was ‘The Silent Assassin’ emerging victorious by way of first round knockout.

Vicente Luque entered tonight’s UFC Vegas 51 headliner sporting a four-fight winning streak, his most recent being a submission victory over Michael Chiesa. All four of the Brazilian-American’s previous wins had come by way of stoppage.

Meanwhile, Belal Muhammad was returning to action for the first time since December, where he had scored a unanimous decision victory over Stephen Thompson to extend his undefeated streak to seven fights in a row.

Tonight’s UFC Vegas 51 main event resulted in a twenty-five minute battle. Belal Muhammad showcased some improved striking and strong grappling to frustrate Vicente Luque throughout the course of the fight. While ‘The Silent Assassin’ appeared to be doing better in the late stages of the contest, timely takedowns by Muhammad kept his comeback at bay.

Check out how the Professional fighters reacted to ‘Luque vs. Muhammad 2’ below:

Following his impressive win, ‘Remember the Name’ called for a fight with Colby Covington.