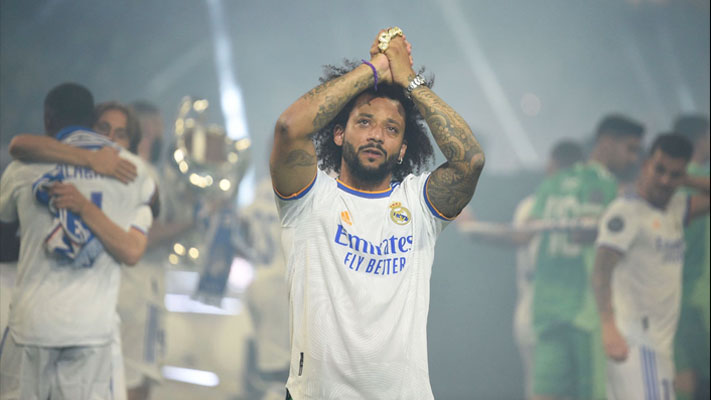 Real Madrid legend Marcelo is set to leave Greek giants Olympiacos after just two months on contract, according to FootMercato (via Daily Mail).

The left-back notably joined up with the side after a lengthy career with Los Blancos but has failed to live up to expectations in Greece.

It has been reported that Olympiacos are ‘fed up’ with Marcelo’s poor performances and inability to adapt to life in the Hellenic Republic. He has not played up to 45 minutes in a single game so far and has started from the bench in all his appearances for the side.

With ongoing fitness concerns plaguing the left-back, he has done little to aid Olympiacos’ push for the pole position in the Greek Superleague. Manager Michel is understandably frustrated about the defender’s inability to secure a starting spot, and his highly publicized move to Greece is expected to come to an abrupt end.

Marcelo enjoyed a successful stint at Real Madrid, winning six league titles while also lifting five Champions League trophies. Since joining them in 2007, the Brazilian went on to make 546 appearances for the club, earning legendary status at the Santiago Bernabeu.

As per Spanish broadcaster Ramon Alvarez de Mon (via Mundo Deportivo), Los Blancos might make a move for Bukayo Saka in the future. The youngster has been impressive for Arsenal this season and the journalist believes a move to the Bernabeu might be on the cards in the future.

“The two players I particularly wanted to see were Jude Bellingham, a Real Madrid target, and Bukayo Saka. The latter, as far as I know, is not a Real Madrid target but he could be in the future because he has very good conditions and perfectly matches what Real Madrid need at the moment.”

“The young English player is 21 years old and plays on the right and could offer an opportunity in the future. Arsenal are going crazy trying to renew him because he finishes in 2024 and the next one, if he doesn’t renew, Arsenal would be in a precarious situation.”

It would not be a surprise if Madrid were to move for Saka, who has been a vital player for both club and country. The Englishman has five goals in 20 appearances across competitions for the Gunners season.