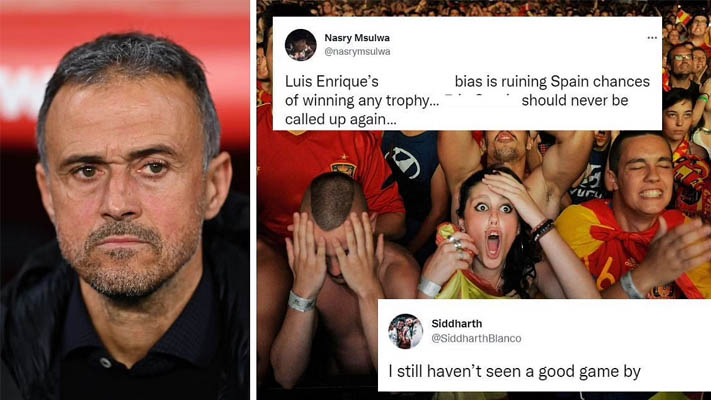 Spain fans had good reason to be angry as the national side lost 2-1 to Switzerland, thanks to an own goal from Eric Garcia.

The centre-back had a rather torrid day at the office, with his own goal only adding more woe to the team’s poor overall performance.

Fans of La Roja did not take kindly to Garcia’s own goal, which cost them all three points, and they took to Twitter to slam the Barcelona defender for his display. Here is a selection of tweets from the unhappy Spain fans:

The Spaniards had only themselves to blame as they fell to a surprising defeat against the Swiss. The resulting loss has seen the side lose the top spot in their UEFA Nations League Group, and they will need to beat Portugal on Tuesday to retake that spot.

It was Manchester City defender Manuel Akanji who shone for the Swiss on the night, with the stalwart centre-half powering a header past Unai Simon’s reach. Akanji notably beat Cesar Azpilicueta to the ball during a corner and guided his team into the lead with the opening goal of the game.

Spain retaliated via Barcelona’s left-back Jordi Alba, who impressively sought out space in the heart of the Swiss defense before putting his shot in. The left-back was guided by Marco Asensio, whose brilliant run drew the Swiss players out of their positions, leaving Alba free to receive a pass from Asensio and score.

However, the all-square scoreline did not last for more than four minutes, with the Swiss driving their Spanish counterparts back and putting one ahead.

This time, Akanji turned provider, supplementing his impressive display in the final third with an assist for Breel Embolo. While the forward’s effort was awarded to Garcia as an own goal instead, it was all thanks to Akanji’s flick from a corner.

The defender showcased a rather remarkable performance, guiding the Swiss to their first ever win against La Roja in Spain. Akanji may have been clinical in attack, but he was also ruthless in defense.

The defender read the game efficiently to make important interceptions and clearances, while also winning aerial challenges to keep the Spaniards out of the game.