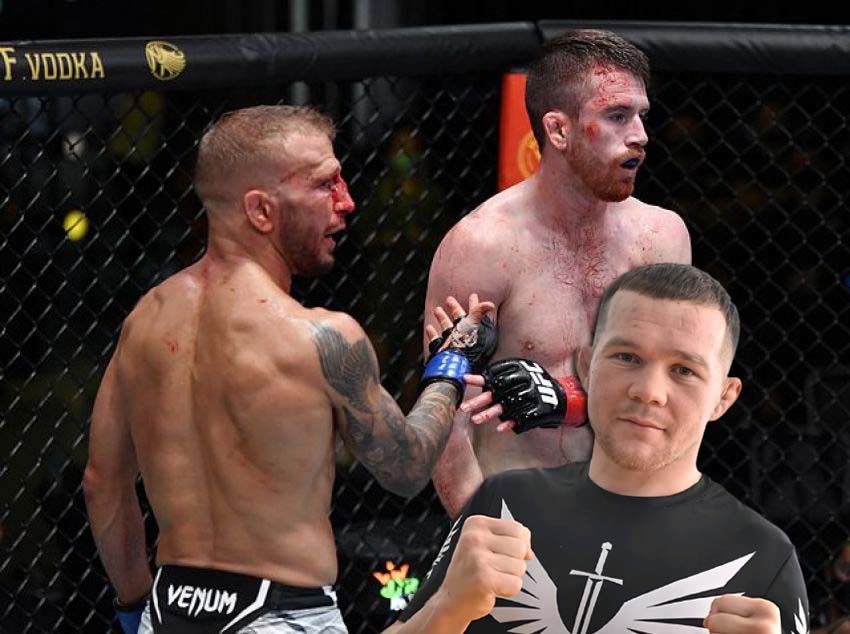 Dillashaw (17-4 MMA), the UFC’s former bantamweight champion, was returning to the Octagon for the first time since suffering a knockout loss to Henry Cejudo in January of 2019. Shortly after falling short in his bid to capture the promotions flyweight title, it was revealed that ‘Killashaw’ had tested positive for EPO and he was handed a two-year suspension.

While TJ Dillashaw was forced to watch from the sidelines, Russian standout Petr Yan went on to capture the UFC’s vacant bantamweight title by defeating MMA legend Jose Aldo.

Yan would look to earn his first title defense against top contender Aljamain Sterling earlier this year at UFC 259, but the use of an illegal knee caused him to not only to be disqualified, but also relinquish the title to ‘Funkmaster’.

Now set to rematch Sterling at UFC 267, Petr Yan was well aware that his next fight could be against the winner of tonight’s TJ Dillashaw vs. Cory Sandhagen matchup.

The bout proved to be an absolute war as Dillashaw and Sandhagen proceeded to go toe-to-toe for twenty-five straight minutes in what was a thrilling back and forth affair.

TJ Dillashaw appeared to injure his knee in the opening round of the contest but fought through the adversity to go on to earn a split decision victory from the judges in attendance.

Shortly after Dillashaw got his hand raised, Petr Yan took to Twitter with the following respectful message for the former champ.

“Respect to the warrior TJ Dillashaw Beating you is always been my goal. This is my division now!” – Yan tweeted Dillashaw shortly following his win over Sandhagen.